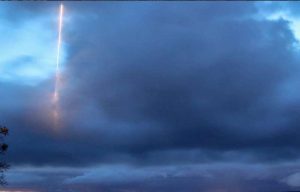 On the day of President Trump’s historic meeting with North Korean dictator, Kim Jung Un, the U.S. Navy, for reasons not yet disclosed, decided to do a missile launch from the USS Ohio, a guided-missile submarines (SSGN), informed sources believe.

The missile launch was followed by an  immediate denial by the military.  The launch took place in broad daylight off the coast of Washington state, near Whidbey Island and it was captured on camera.

A missile launch for whatever reasons at this time could be considered highly provocative and in bad judgement because it could threaten the peace talks in Singapore.  So, is this the reason for the denial coming from the Pentagon?  One can only wonder, but it’s clearly a missile and there are no fixed launch sites in the area.  Add to the fact that there were no missile capable surface craft reported in the area and this is in the patrol area of the USS Ohio armed with up to 154 missiles.

Reasonable deductions can be made that the U.S. Navy was the responsible, so why the denial?  Was it a screw up in timing?

This entry was posted in Military and tagged missile launch, USS Ohio, washington. Bookmark the permalink.