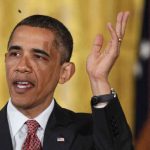 It never hurts to recall just how slavishly fawning the media was about our former president, Barack Obama. News Busters looked back today in an article titled, “This Week in Media Bias History: Obama Kills a Fly, Media Go Crazy!”

What can’t Barack Obama do? That’s something gushing, liberal journalists wondered for eight years. On June 16, 2009, John Harwood and David Shuster were amazed that the then-President killed a fly. Harwood narrated: “He swatted his hand and he said, ‘I got the sucker.'”

Harwood went on…“He threw it onto the ground. It was a, you know, Dirty Harry “make my day’ momment.”

It would be perfectly fine with me if they were equal opportunity gushers, but they’re not! They make a darling of the Democrat president and a demon of the Republican president and that is why their approval ratings are at historical lows and they are losing market share.

Rich Noyes is featured in the News Busters article. You can follow him on Twitter if you have the time. His account is (apparently) dedicated to “This Day in Media Bias History.”