When it comes to corporate greed nobody does it better than America.   CEO pay in the U.S. has grown exponentially since the 1970s, according to the Economic Policy Institute (EPI), rising almost 1,000 percent compared to a rise in worker salaries of roughly 11 percent over the same time period (adjusted for inflation.)  Starting this year, the Dodd-Frank Act, enforced by the Securities and Exchange Commission (SEC), will require publicly traded companies to publish their CEO-to-worker pay ratio, a move that could bring this issue further into the public consciousness.

The age old argument is that a CEO is worth exactly what he is making if he grows the stock, brings value to company and it’s shareholders.   This sounds logical at first glance.   Everybody is making money, be happy, don’t worry…. famous last words.

In the art world it is said that a great painting has symmetry, sense of proportion and balance that makes viewer comfortable.   The same might be said of a well run company.

When CEO’s continue to grow their salary like a wildfire on windy day, even when the company is in failure mode, stores are closings and they are losing market share, there’s something terribly wrong, a company is not well balanced.

In theory the board of directors should prevent such a scenario from happening long before it becomes terminal.   Their sense of responsibility to the  shareholders should bring about a corrective intervention, but, that is not happening.  Why?  Evidence points to a corrupt “good ol boy” system – the board of directors are in on the looting.  This is where reform desperately needs to happen and is long overdue.  This legal looting by CEO’s and their cronies is degrading ethics across the spectrum of business and that is casting a shadow over the future of capitalism.

Too often the CEO has a hand picked board of directors the CEO has essentially bought off with the company money.   These BOD guys are frequently rotated from company to company.  They are almost single-handedly responsible for creating a wealth gap that sparked movements like Occupy Wall Street.   The corrupt boards have allowed the CEO’s salary to grow at monstrous proportions, but off set this deficit by restricting employee compensation with unusual frugality…thus the ever increasing wealth gap.  And this has caused a lack of trust in our stock market.  Our market volatility linked to corporate scandals has cost the little guy dearly.

Fortune magazine wrote, “”CEO compensation at the largest firms dipped temporarily in 2015, but remains 940.9 percent above its 1978 level,” the report says. “This growth in CEO compensation far exceeded the growth of the stock market . . . . This shows that executives have done far better than the firms they have led and executive pay cannot be simply attributed to better firm performance.” 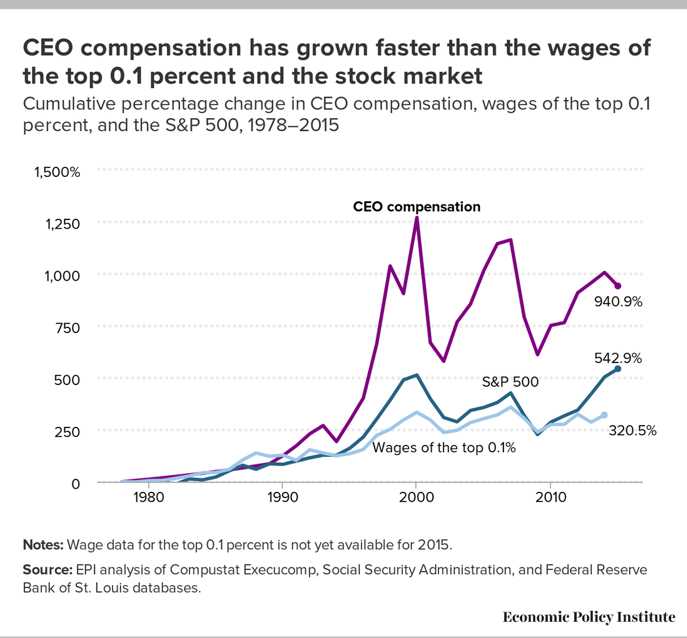 The title of highest-paid CEO among the U.S.’s largest companies goes to Broadcom executive Hock Tan, who earned $103.2 million in 2017.

In 2017, Tan had a base, cash salary of $1.1 million, plus a performance bonus of $3.7 million for exceeding revenue and operating margin targets in the year. Also wrapped into his nine-digit payday: some $23,234 in travel expenses for Tan to travel to his Pennsylvanian residence (Broadcom completed its move from Singapore to California in April), as well as $16,200 in 401(K) employer matching contribution, and another $36,386 for car service.

But all of that pales in comparison to the shares Broadcom awarded to Tan that had a value of $98.3 million, according to regulatory filings. All together, Tan earned $103.2 million—about 318% higher than a year earlier.

We don’t want  the government step in and put a lid on CEO salaries, but it’s going to happen is the BOD’s don’t do a better job.   If there is reform needed, this is surely the area…give us honest board of directors that work for the shareholders, not the CEO.

This entry was posted in Fraud Alert, Morals and Ethics. Bookmark the permalink.