LOS ANGELES – Rodolfo Rodriguez was attacked by several people after reportedly bumping into a little girl on his daily walk in South Los Angeles. Detectives do not believe an attack on a 91-year-old man on the Fourth of July is a hate related incident, authorities said. 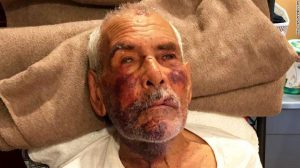 On Tuesday night, Century Station detectives arrested Laquisha Jones, who is suspected of being involved in the assault, according to the Los Angeles County Sheriff’s Department. Jones, 30, was booked on suspicion of assault with a deadly weapon.

Rodriguez had gone out for a walk in Willowbrook about 7 p.m. on July 4 when he was assaulted, according to a GoFundMe campaign set up by his family. Rodriguez has a broken cheekbone and bruises on his face.

His family said a woman confronted Rodriguez after he reportedly bumped into a little girl who was with her. Rodriguez was then struck from behind, and “as he fell on the ground, he blacked out,” Sheriff’s Det. Matt Luna said.

Misbel Borjas, who lives near Rodriguez, was passing by in a car when she saw him walking and trying to pass a woman and a girl. Then, Borjas said, she saw the woman push Rodriguez and start to hit him with a block of cement.

“She was yelling at him, ‘Go back to your country,’ or ‘Go back to Mexico,'” Borjas recalled. “It was racist.” But authorities said that through their investigation, “detectives have discovered that this is not a hate-related incident.”

In case you are curious what constitutes a hate crime, here is a summary… “his is because California’s hate crime statutes, beginning with Penal Code 422.55 PC, impose severe, additional punishment for harming, threatening or harassing someone because of the person’s…