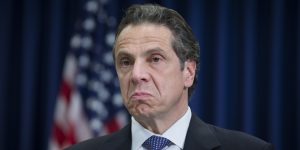 New York Governor Andrew Cuomo told a group of people at a bill-signing event yesterday that America was never great, apparently in an attempt to disparage Trumps MAGA slogan:

“We’re not going to make America great again. It was never that great,” Cuomo said, to an awkward blend of gasps and chuckles.

What a complete a$$!

I guess I’m not the only one who thinks so. A little later a spokesperson for Quomo issued a statement:

“The Governor believes America is great and that her full greatness will be fully realized when every man, woman, and child has full equality. America has not yet reached its maximum potential,” Cuomo’s press secretary, Dani Lever, said in a statement. “When the President speaks about making America great again – going back in time – he ignores the pain so many endured and that we suffered from slavery, discrimination, segregation, sexism and marginalized women’s contributions. The Governor believes that when everyone is fully included and everyone is contributing to their maximum potential, that is when America will achieve maximum greatness.”

Translation: “…Ah, yeah, he shouldn’t have dumped on America like that so, here, let me blow some smoke up your bumm to make you feel better…”

I’d like to ask this twit how Quomo and the Democrats plan to make every criminal, panhandler, and chronic heroin user (citizens all) feel “fully included”…and how do they plan to see to it that those who choose to live a low life are “contributing to their maximum potential?” What they describe is perfection that can never be reached as long as humans are flawed their natural flawed selves…free will…free choice. Democrat policy seem to be hell bent on feeding the flaws. Succees is less than 2% growth and lots of needy dependent people.

Trump was elected with a slogan, MAGA, that offered real hope and change for many Americans who had suffered greatly for years under Obama’s Democrat socialist policies. Americans had been told that his lousy economy was the “new normal”…that stronger growth just might not be possible and they should just accept it. Food stamps were the crumbs they offered to compensate for the bad economy and worthless health care.

What has happened since Trump said he would make America great again? This month 4.1% GDP growth was announced. Today The Wall Street Journal reported that youth unemployment “fell to it’s lowest level in more than 50 years!” Wages are beginning to rise…WalMart Exec’s announced today, “This is the Best Economy for Our Customers in Decades” Makes sense unemployment levels for all groups are way down and people finally have some extra money in their pockets to spend. A Rasmussen report issued this week found Trumps job approval rating among blacks has doubled from last year to 36%. And there is so much more going on every day as Trumps administration works to solve problems. Imagine if Americans worked as hard in their own families and communities to make America great?

No nation is perfect but America is unique in all the world…a very special place that we should all be proud to call home. I suggest those who are trapped in the grievance business, trapped in the protest game, trapped in failed socialist ideals get off that bandwagon and take advantage the freedoms they already possess to build whatever life they desire. Nobody in America is subjected to discrimination that cannot be overcome with imagination and hard work. The Old South closed lunch counter does not exist. If a woman wants to become CEO then let her start a business and grow it into something she can be proud to cal her own…by her own effort.You are not your feelings people…get out of your heads and get to work! And for heavens sake…learn the valuable lesson that words cannot hurt you or stop you unless you choose to let them.

Quomo and company don’t appreciate what they have here in America and care only about gaining and keeping power over other people. Quomo has hinted at running for president in 2020.

12 Responses to America Was Never Great?