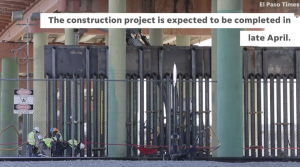 “Build the Wall” became a battle cry for supporters of President Trump in the last election. Trump and his supporters have been wrongly accused of racism and hatred but the issue for those accused is the rule of law. We want people to come to America…we want them to come legally! We abhor the drug and human trafficking and want it stopped. We want criminals prevented from crossing into America illegally to do their crimes. Republicans initially failed to include funding directed specifically to the Wall. But the latest omnibus bill did include a “$1.6 billion down payment” for the Wall.

Trump will fulfill his promise…just wait and see. In fact, Construction is already underway in three key areas. Thomas Lifson at The American Thinker, “Watch that new border wall going up where it is needed most”

Congress still refuses to fund a complete border wall, but that isn’t stopping the king of construction, Donald J. Trump, from delivering the goods where it is needed most. The El Paso Times has provided an entertaining and interesting video of construction of a new, much bigger border wall being built on the border separating the metropolises of Juarez, Mexico and El Paso, Texas, with a combined metropolitan population of at least 2.7 million souls. In an environment of scarcity, priorities must always be established, and the most densely populated areas should pay the greatest dividends in limiting the prospects of border-jumpers. San Diego and Tijuana, along with El Paso and Juarez are ground zero.

2 Responses to THE WALL!