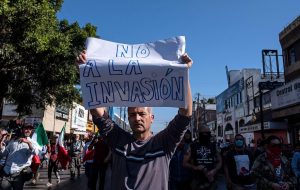 Well, well, well…how to explain brown people “discriminating” against brown people? Will they be labeled “racist” for wanting the caravan to “go home?”

A group of mostly male Central Americans broke away from the large groups headed for America and made their way toward Tijuana, Mexico recently. The sanctuary state of California was undoubtedly seen as the most friendly and welcoming border area to cross. But they’ve run into unexpected resistance and protest from the citizens of TJ, many of whom quoted president Trump and called the group an “illegal invasion” of their country.

The associated problems are many. The corrupt failing governments of the nations in Central America have created an environment ripe for crime and lacking in opportunity and safety for their citizens. Who wouldn’t want to escape, to risk life and limb, to get to the United States? But many of these people are being pursuaded to believe they have a right to be unconditionally accepted. The open borders crowd are involved, whether by mere agreement or by the more forceful means of organizing, funding, and offering free legal advice. Lawyers are instructing the people to say they are escaping danger and oppression rather than tell the truth, that they come for jobs and a better life. This is irresponsible behavior, to say the least. There’s a legal process for asylum seekers and this isn’t it. Deceptionand lies aren’t the best ways to begin a relationship with a country you hope to make your home.

A person must meet certain criteria to be considered an asylum seeker:

The United Nations 1951 Convention and 1967 Protocol define a refugee as a person who is unable or unwilling to return to his or her home country, and cannot obtain protection in that country, due to past persecution or a well-founded fear of being persecuted in the future “on account of race, religion, nationality, membership in a particular social group, or political opinion.” Congress incorporated this definition into U.S. immigration law in the Refugee Act of 1980.

The US welcomes immigrants who apply and go through a legal process to come here. The US has been a safe haven for people who meet the above conditions as asylum seekers. But the United States cannot, and must not, become a dumping ground for desperate people who are victims of irresponsible governments and leaders. Apparently Mexicans, at least in Tijuana, feel the same way. This should demonstrate, once and for all, that this is not an issue of race, but of respect for the rule of law.

9 Responses to Invasion Marchers Met by Angry Citizens in TJ