To Build or Not to Build, That is the Question

Our hearts go out to those of you who have lost so much.  The scope of this tragedy is almost unimaginable.   However, the outpouring of volunteers and donations has been almost miraculous!  This is indeed a very special community with so many good people trying to do whatever they can to help and ease your pain.  This is a good place for the healing to begin.

Paradise, CA – A week ago there was a town and now there isn’t.   Even as the losses mount, it’s being called the worst fire in a century and certainly the worst in California. 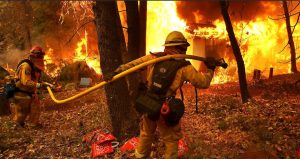 The pre-fire town of Paradise has only been incorporated since 1979.  And because of that, a certain lack of planning went on as an unincorporated town.

After it became a city,  attention was given to the many improvements needed, including fire safety measures, but limiting those things was always a lack of funding.

This was common knowledge among the locals and it had been a major concern for the city council from day one.  Prior to becoming incorporated, the residents built their homes and businesses using a septic system or what vaguely resembled one.  As the town grew it became apparent that the septic system really wasn’t up to the task.   They needed a massive new sewer system with expensive pumping stations to carry the sewage to a yet to be built sewage processing plant.  But, the costs… Paradise is a mountain town and this mountainous terrain it made the task of sewer hookups incredibly expensive.  Just digging a trench into the rocky, red, soil to lay sewer lines was extremely difficult and cost prohibitive.

Paradise also needed a costly clean water delivery system.  That posed many of the same challenges a new sewer system…. but mostly it was just about money.   If these billion dollar projects was not enough burden, Paradise also needed improved roads.  That point was made abundantly clear as 27,000 residents tried to flee the Camp Fire, only to be stuck in a miles long traffic jam.  Some died in their cars.   Paradise had long sought better escape routes in case of fire, but it always came down to one thing… money.

There was never enough money to fill all the needs unless the federal and state governments stepped in.  Sure, it was requested, but it never happened, other than for single emergency escape road that was finally installed several years ago, Paradise was left standing with hat in hand.

To build a completely new city on flat ground, with soft soil, is a big project, but to build it in the mountains, well, costs go up exponentially.   But, the city did what they could.  Small improvements here and there, but not nearly enough were completed before the deadly Camp Fire arrived and wiped them out.

The tax base of Paradise comes from mostly residential housing and every city manager in CA will tell you that taxes from residential property is barely a break even amount to offset the costs of public safety.  Their real tax revenue comes from businesses. But Paradise had very few major businesses and that left them consistently short of tax revenues for those needed improvements.  In fact, there were times when just meeting payroll for City personnel was a challenge.

That is why, despite all the facts, evidence and all the known needs, the multi-million dollar improvements were constantly beyond reach.  It was incredibly frustrating. 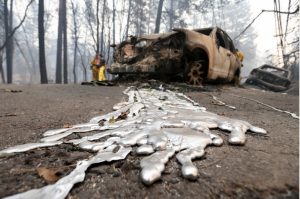 Sooner or later, as this crisis winds down and people take stock of what is left, there is one big question to be answered:  Should Paradise be rebuilt or relocated?

Do we want to use FEMA and insurance money to rebuild a mirror image of what we lost and put it right back in the  same place with the same risks?  That doesn’t make any sense to me.  Even if we rebuild with our best fire safety measures in place, it’s still a mountain town and eventually there will be fire risks.  This is what happens when urban populations mix with nature.

We need to know. . .  is it smart and is it  cost effective to rebuild a new, improved, Paradise on the ashes of the old Paradise?   New construction  would  presumable include the same mix of mobile homes and framed houses, about 6,000 homes, 2000 mobile homes  and some retail outlets.

To know the answers to the above is to know the future of Paradise.  Right now, we have no clue how many people even plan on returning?  Many of the displaced people I have spoken with are done with California and this fire provides the cash they needed to leave.
Others are too old to consider rebuilding, it’s just too much for them, so they will be seeking a new location.

But, what about those folks who are attached to Paradise with friends and family in the area?  FEMA and the State will help them, but even with that help will the remaining citizens of Paradise be able to pay for those needed improvements that government can’t or won’t cover?

The idea of just fix it and lets get back to living in our town again is a very compelling idea among the survivors.  However, its a sobering thought to consider this is going to be a long and complicated process.   The length of time it will take to rebuild may be years, and this may not work for many families.  Then there’s that money problem again.  Will it ever be fixed?   So, when the tax revenues come up short, do the rest of CA taxpayers pick up the difference?  Do Californians pony up more emergency cash every time a town like Paradise burns?  Remember, Paradise is not the only mountain town in this state, what about the others and their safety needs?  Who pays for their much needed fire prevention improvements?  And if they should burn… who covers their reconstruction?

Deadly California wild fires have wreaked havoc on this state for at least over a decade and it seems to be something that will be with us for a very long time. 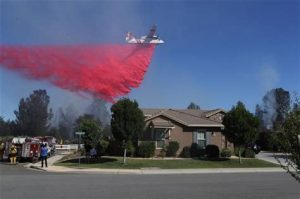 Those massive fires cost CA billions and have taken many lives.  In each case the ingredients were the same.  Lots of dry, combustible materiel on the ground and high winds.

For the last 7 years draught has led to dangerously dry conditions all over the state.  Combine that to the way we mismanaged forest fires back in the 50’s, 60’s and 70’s, we currently have way too much combustible material on the ground too close to homes.  Now if a fire breaks out it burns white hot.  That extra heat destroys trees, and nature is devastated for decades.   Abundant, dry, combustible material in close proximity to homes was part of the reason the fire in Paradise spread so fast and was so deadly.

There are many things we can change, but the weather is not one of them.  This is why we are compelled to look at our urban planning and building codes.   There are adjustments to be made, because we can’t sustain these annual losses – it’s that simple.

Of course I’ve only touched upon a few of the big questions.  But, for the sake of saving lives and doing it right…. we better get good answers.  If we don’t, we could find ourselves in the midst of another disaster sooner than we might imagine.

This entry was posted in Uncategorized and tagged CA., California, costs and questions, fire, Paradise, rebuilding from the ashes. Bookmark the permalink.

9 Responses to To Build or Not to Build, That is the Question