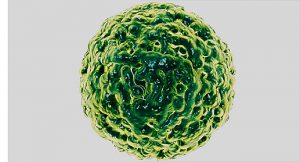 It begins with a mild feeling of nausea. You think, perhaps it was something you ate, something that didn’t sit quite well.  You expect it to pass, but then it gets steadily worse over the course of the next 12 hours.

By this time, you’ll probably be hearing a little gurgling noise in your plumbing – hint, be prepared to dash to the porcelain throne.   Say hello to your new little friend, acute gastroenteritis aka the Norovirus!  (Pictured above)

In your dash to relieve yourself, there may be a sudden moment of confusion when you wonder, should I sit on the toilet or stick my head in it?   Answer:  Carry a bucket so you can do both, because you will really, really.… want to do both!  It’s like this autonomic reflex that kicks in and its telling your body barf and blast now or die!

Intermittent bouts of debilitating nausea, projectile vomiting and extreme diarrhea follow like clock work.   Montezuma’s revenge has got nothing on the Norovirus.  Noro is the pants down winner.

The upside is, this virus is relatively short lived, 3-5 days.   The downside is you can get it again because there are many variants and it’s really contagious.  The half-life of this little guy is about 15 days, so contaminated surfaces from clothing to counter tops become like tiny mine fields for the unprepared.  While infected, you can try wearing a mask and dousing everything in disinfectant, but even then it’s a roll of the dice if you will control its spread.  And consider yourself a carrier for about 4 days after symptoms subside.  So do the right thing and self-quarantine whenever possible.

TREATMENT:  Basically just let it run its course.  Taking a diarrheic might help a little, but might actually extend the symptoms.  Just let it blow through, flush it out…is what my doc suggested and drink lots of fluids.   If you need nausea meds Zofran is the recommended pill.  It works pretty good too, but your doc will have to prescribe it.

ORIGINS:  On average, noroviruses cause 19 million to 21 million cases of acute gastroenteritis in the U.S. per year, according to the CDC. The norovirus was originally called the Norwalk virus, after the town of Norwalk, OH, where the first confirmed outbreak happened in 1972.

This entry was posted in science and tagged Norovirus. Bookmark the permalink.