Nancy Spanks Another Brat in Congress 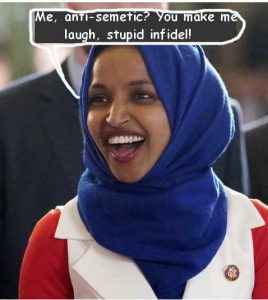 It didn’t take long for freshman Congresswoman Ilha Omar-D, shown at left to show her true colors, which are not red, white and blue.  She tweeted that members of Congress and by inference those in her own party, are being paid off with “Jewish money” to support Israel.

When the House Speaker, Nancy Pelosi, found out what was said, she went ballistic.  She said Omar’s use of anti-Semitic tropes and unsupportable accusations are deeply offensive!  An angry Pelosi called on the first term Congresswoman to apologize immediately.

The House Foreign Affairs chairman and House Judiciary chairman echoed Speaker Pelosi’s condemnation of Omar’s remarks, saying she (Omar) has failed the first test of leadership.  They referred to her comments as, shocking, hurtful and intolerable.

However shocking it was to democrats, it came as no surprise to most of us who know this is not the first time a Muslim politician has made harsh anti-Semitic remarks.  What is shocking to us is how the democrats could elect her to Congress?

Ilha Omar is one of two Muslim females to serve in Congress.   At this rate she may also be the last.

This entry was posted in Uncategorized and tagged congresswoman, Ilha Mor, rebuked by Pelsosi. Bookmark the permalink.

31 Responses to Nancy Spanks Another Brat in Congress