Honoring One of America’s Finest Patriots

Today is Frederick C. Douglass day, although most American’s don’t even know who he was, but we should.   He was a man of true character and vision.  Like MLK, Douglass was a Christian minister and a great orator on human rights.  Unlike King, he was  he was faithful to his wife. 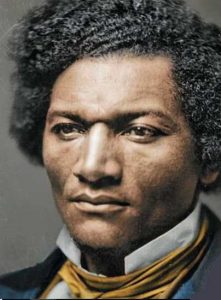 Here are a few of Douglass’ quotes:

“It is easier to build strong children than to repair broken men.”

“People might not get all they work for in this world, but they must certainly work for all they get.”

“I prefer to be true to myself, even at the hazard of incurring the ridicule of others, rather than to be false, and to incur my own abhorrence.”

Douglass was one of America’s most important social reformers. Born a  chattel slave on a Maryland plantation in 1818, Douglass died a highly respected American citizen in 1895. Blight captures in vivid detail the rise of Frederick Douglass from obscurity to prominence.

Douglass was a self-educated man. With some rudimentary alphabet lessons from his slave mistress and white playmates, the Bible and the Columbian Orator developed his speaking, reading, and writing skills. These skills enabled him to write three autobiographies about his struggles against American slavery and racism and for African American citizenship.

In 1845, his first autobiography, Narrative of the Life of Frederick Douglass, an American Slave was published while living in Lynn, Massachusetts. He was a fugitive slave. In 1855, now a free man and a resident of Rochester, New York, he issued a revised autobiography, My Bondage and My Freedom. He was a leader of the abolitionist movement. In 1876, the Life and Times of Frederick Douglass chronicled his journey to becoming one of the more prominent citizens of Washington, District of Columbia. He was a leading member of the Republican Party and an advisor to President Lincoln.

Douglass believed in speaking truth to power. He concluded that the American Declaration of Independence and Constitution were anti-slavery documents. These documents provided a political solution to the slavery problem.

Douglass was also a strong supporter of women’s rights.

This entry was posted in Morals and Ethics and tagged Frederick Douglass. Bookmark the permalink.

14 Responses to Honoring One of America’s Finest Patriots