Javier Morales, a young man with an extensive criminal history was recently stopped by a Napa County Deputy Sheriff.  That traffic stop turned into a fatal gun battle.  Please read the story below: 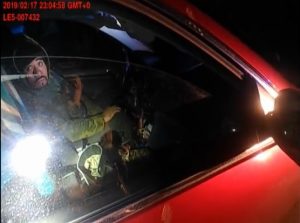 As body cam footage will show, Morales appears cooperative and non-violent.  He shows no anger towards the deputy, who initially is standing on the right side of his vehicle out of traffic.  This places her slightly behind his front passenger door.  She is shining her flashlight into the vehicle and at first you can Morales face and both hands very clearly.

She explains to him, she is coming around to his side of the car and not to move.  At this very point Morales left hand dips suspiciously to the front of his seat.   It only takes a  second.  The deputy did not react, so its possible she either did not see it or felt that the action was not a threat… my take was there was possibly a weapon on the floor.

Now the deputy is walking behind his car and approaches Morales at his 7 o’clock position, that being, slightly behind the driver door (smart-probably saved her life), so it is necessary for him to twist to his left to see her.

She commands him to roll down his window, but Morales fumbles about in an odd hesitation. She repeats her order.  It’s, almost like he is thinking about doing it, but he’s doing something else, then he rolls down the electric window and looks in her direction.  As he does he produces a pistol and fires almost point blank at the deputy.  But, it appears he has aimed wide and the shot misses.

She retreats quickly, saying “shots fired” twice over her shoulder mike and by the time she reaches the right rear of Morales’ vehicle she has drawn her pistol and she opens fire.  There are a number of shots fired, about 16, by the deputy.  At least one fatally wounds Morales.

News footage is available of the shooting and you can use this link to see the body cam video, if you wish.

Of the eight news links that I have personally reviewed, not one of them mentioned the fact that Morales was a Mexican National and that he was in the country illegally.

None of the stories I reviewed mention the fact that this State will take legal action against any CA officer that notifies ICE of an illegal alien held in jail or if they otherwise provide assistance to ICE.

The omission of pertinent details has the dangerous potential to slant a news story.  This one reminded me of the story about a 12 year old girl reporter who was threatened by AZ officer to stay out of his business.  It took some time but eventually the facts in that case did come out.  But, the lead story and headlines was for the girl and against the cop.

This seems to be a systemic problem in the media.  It certainly was in the Travon Martin  case.  Same with the in-custody death of Freddie Grey, officers were convicted in the media and found innocent in court.  There are many other examples of this injustice, especially whenever President Obama inserted himself.

We had a rash of biased reporting during his term and race relations sank to a new low.  So irresponsible reporting does take a toll, i.e. black football players taking a knee or chanting “hands up, don’t shoot.”

It’s clear to me that it’s not safe to assume any news stories are as first reported.  It would appear the stories about police and about politics are prone to being edited in a way to fit a narrative and not the facts.  They are often done in such a clever way we would hardly notice.

It is estimated that the mainstream news media is composed of about 93% democrats.  This might help explain why  80% of the news stories about Trump are negative and why so many other news stories are tainted with bias.

It’s my opinion that we’ve moved from reporting the facts to news-editorials.  If so, we’re on very dangerous ground folks.