California – Perfect Example of What Not to Be as a State 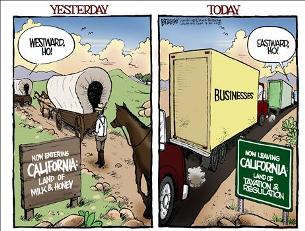 My wife and I live in the San Francisco Bay Area.  But like 46% of Bay area residents in a June 2018 Bay Area Council poll, we are considering leaving California.   Arizona looks like our destination although many friends have already moved to Texas, Nevada, Idaho, and Tennessee.

Why?  Simple.  California’s Progressive culture and government has turned the state into a filthy, debt- ridden, congested third world country with high taxes, high crime, and the highest housing costs in the country.

Our little piece of bliss is a third world country, made up of a large, wealthy population (Hollywood and Silicon Valley tech giants), an enormous poor population, and a declining middle class that elected officials only view as a large, distributed human ATM machine from which they withdraw money for “sanctuary cities” (actually sanctuary everything, cities, universities, the State, etc.), social justice programs, suing the Trump administration, and “free” everything for everyone.

(The federal government has informed California this year, for example, that as it [California] tries to implement free health care for everyone, it illegally enrolled 400,000 people on Medicaid at a cost of $1 billion plus per year).  According to the Census Bureau, California has the highest poverty rate in the country at 19%.  And, according to the Department of Health and Human Services, California has 12% of the country’s population and 43% of its TANF (welfare).  California spends $103 billion per year on welfare, more than the next two states combined (New York at $61.4 billion and Texas at $35.4 billion).

California has the one of the highest GINI, or inequality, ratio in the country.  A GINI ratio measures the difference between the richest residents and its poorest residents. According to Chapman University’s Center for Demographics and Policy, the state’s inequality is worse than Mexico and equal to Guatemala and Honduras (ironically, where many of our new voters appear to be coming from).

San Francisco, proud to be what it thinks of itself as America’s most Progressive city, is a good surrogate for the state as a whole.  The city has:— hundreds of complaints weekly (more than 1600 in one recent week) about human feces (or “shit” to our progressive friends) on the street, in parks, and in other public places; residents in the city, therefore, implemented a “POOP” or “Human Waste” Map, that tells visitors and residents which neighborhoods to avoid because of the overwhelming amount of human waste on the streets and other public places.

As if feces and urine everywhere are not bad enough, the city government is, in effect, turning the city into one large, outdoor illegal drug market.  The city distributes more than 4.5 million hypodermic syringes and needles yearly to its growing horde of drug addicts; so many drug addicts clog the city’s commuter train (BART) stations.

But filth is not the city’s only issue.  the FBI recently ranked San Francisco as the city with the highest crime rate in the country.  For example, in 2017 the city’s residents were burdened with 32,000 car burglaries (residents put signs in their car windows begging people not to break their windows or steal anything from their cars).

The city of San Diego, adjacent to the Mexican border, is itself recovering from a Hepatitis A outbreak from human waste by washing its downtown streets nightly with bleach.

The State has the country’s highest income tax (and the highest capital gains tax in the WORLD), sales tax, gasoline tax, unemployment tax, and workers compensation tax.  And, lucky us, we have the only Cap and Trade tax in the country, a secret “tax” administered by a State of California Corporation formed in Delaware.

Under the heading of criminal justice reform, the State has recently reduced many crimes in the State from felonies to misdemeanor status and released thousands of inmates from prison early.  This August Governor Moonbeam (Jerry Brown) signed bail reform into law outlawing money bail.  Combined, these new laws have added to both the crime problem and the homelessness problem.

In the last election, 70 California cities raised their sales tax rates (primarily to pay for escalating pension costs for our failing pension systems).  In addition repealing last years new gas and vehicle registration taxes  in Proposition 6, will likely be defeated next week.

Reform Network ranks California as the second worst “Judicial Hellhole” in the Country.  CEO magazine has ranked California the worst state in the Country to do business in for the 14th straight year.

California’s public schools are among the worst in the country.  National tests place California students 44th (reading) and 46th (math) in the nation.

While private sector workers in the State (and Country) who retire this year with at least 30 years of full-time work will receive, on average, a Social Security pension of $15,800 ($38,000 maximum), State and most city workers in the CalPERS pension system will receive a pension of $70,000 (police and fire more than $100,000 at age 50).

Teachers in the State make, on average, $81,000 per year and retire at 60 with an average pension of $55,000 per year.  Yet both pension systems (CalPERS and CalSTRS) are only 2/3 funded with unfunded liabilities of close to $1 trillion.  Employer contributions (read taxpayer contributions) that are already unsustainably high are doubling over the next five years to try to keep the systems from bankruptcy.

TRIP, a Washington, D.C. nonprofit, reported this month that California is home to six of the 20 U.S. cities of 200,000 or more people with the highest percentage of their streets and roads whose pavement condition is rated in poor condition:  No. 1 San Francisco; No. 2 San Jose; No. 3 Los Angeles; No. 12 Sacramento; No. 13 Riverside; No. 16 Fresno.

According to the Federal government, California’s Cost of living is 41% higher than the national average.

Kiplinger has ranked California the 3rd worst state, behind New York and New Jersey, to retire in.  They clearly missed something because from where I live, we’re number one and as a result we are all moving.

Not to be all negative, the State and many cities in California have one BIG accomplishment for 2018:  they have banned plastic straws.  Yes, plastic straws.  I guess they wanted to make sure there is enough plastic for the free hypodermic syringes they are giving out. And, oh, another big accomplishment, by golly, was banning all drinks for children meals in restaurants except water and milk.  This may sound stupid, but we have all seen progressive parenting.

Maybe “Progressive” works when the progressive population is small and can be mostly ignored and/or tolerated by the population that pays the tab for it.  But when its population becomes something closer in size to the mainstream population it is painful to live with and financially unsustainable.

This entry was posted in Uncategorized and tagged California. Bookmark the permalink.