by CBS News“The escalation of the U.S.-China trade fight — and the threat of further tit-for-tat measures — marks a significant risk to both countries and the world economy, analysts said. 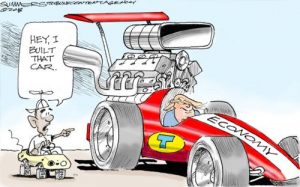 The U.S. early Friday increased tariffs on $200 billion of Chinese goods to 25% from 10% and President Donald Trump threatened to extend levies to other goods from the country in an attempt to ratchet up pressure on Beijing as trade negotiations continue. Beijing has said it would retaliate.

“No one wins trade wars, not even the bystanders,” wrote Gregory Daco, chief U.S. economist at Oxford Economics, a research firm, in a Thursday note.”

I don’t believe a word this guy and CBS News just said, they are talking like a weak knee’d liberals.  First off, the US is responding to bad faith trading and criminal conduct.   China has been breaking their word in trade agreements with the US and ripping us off for decades.

Thanks to our spineless politicians and bureaucrats, they think this is just the way business is done.   They’ve somehow got the idea that we really don’t care about them stealing trade secrets, spying on our defense industry  and blatantly infringing on patent rights, whenever it suits them.

They could care less about global warming too, they’re the greatest polluters in the world, but they get away with it because they are an emerging superpower and idolized by our lefties and that’ve sold us a bunch of BS that they will reform once they get on their feet.  Pffffft.   When has China’s word been good for anything?  Clue: They are not our friend.

Theft and corporate espionage and their mild drift to a capitalist market place  has been the main reason for China’s surge in wealth.  But, kleptocracy is no way to run a country!  At least Trump is calling them on their bad behavior and he’s going to make them pay.  Either we get fair trade agreements or they can forget trading with the US.

I am not a bit worded about a trade war with China and you shouldn’t either.   They got it coming, however I really don’t think they will take it that far.  In a full on trade war America will win and China knows it.

If we absolutely had too (and we don’t) we could become completely self contained.  We need to import virtually nothing from China or anyone else.   America has all the resources and manufacturing capability we need to sustain us, while China does not.  Their fragile economy would collapse into recession, if not outright depression if we engaged in a trade war.  We can do to them what we did earlier when we broke the USSR.

Had the past 4 presidents taken a hard line against China’s economic aggression we wouldn’t need to be taking this stand now.  But, even though we’re doing it late, at least Trump has the guts to do what needs to be done.  I’m 100% behind Trump on this one.

We’ll be alright, but China needs to know we won’t be a soft target anymore… we’re no paper tiger, we’ve got teeth!

This entry was posted in Uncategorized and tagged China, fairness, trade policy. Bookmark the permalink.