As a gun owner I do believe in the 2nd ammendment and I realize with freedom of any sort, there will be risks associated.  There are a lot crazy people in this world that might get their hands on a gun…then watch out.  But, the freedom to drive a car results in 40,000 deaths a year and most of the drivers were far from crazy people.  Boating accidents accounted for 658 deaths and 2,629 injuries.  Even bicycling is not without risks, 777 dead and 400,000 injured in 2017.  But, one horrific incident with a gun and the liberals scream for gun control.

That said, when idiot gunowners go out of their way to abuse their 2nd amendment freedom in ways that make other people concerned and apprehensive, they do terrible harm to the 2nd amendment and bad things usually follow.

In the picture below you can see what I mean.   Only a fool would take a weapon like this into a coffee shop.  However, it could be that the person in the long coat wasn’t a supporter of gun rights at all.  It could be this was just a put up job by the anti-gun crowd; I wouldn’t doubt it.   But, in either case, if the abuse keeps up you, will see legislation passed to curtail open carry laws.  And that’s unfortunate response since most gun owners are far more responsible and safer than your average licensed driver.

The guy shown at the top is perfectly acceptable with his legal open carry weapon – the guy below him is not, although in most open carry states they are both 100% legal.

There is this kind of open carry….. 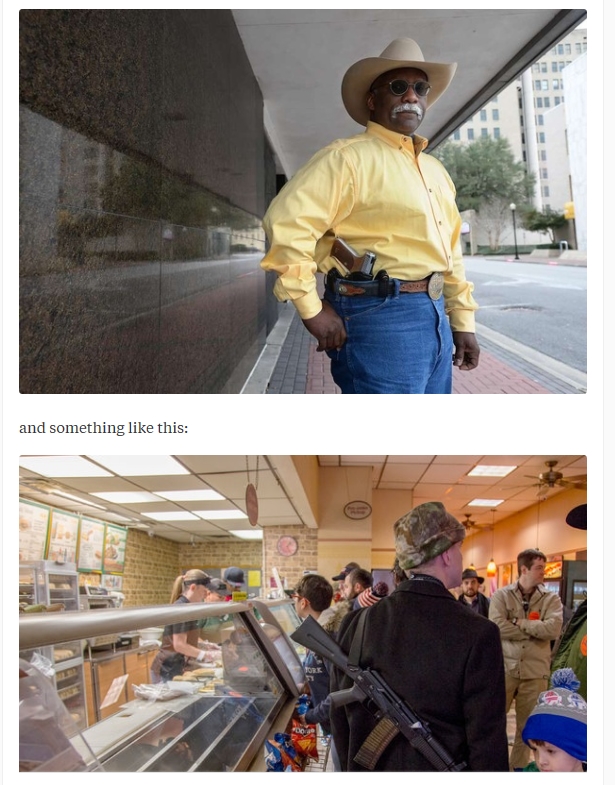