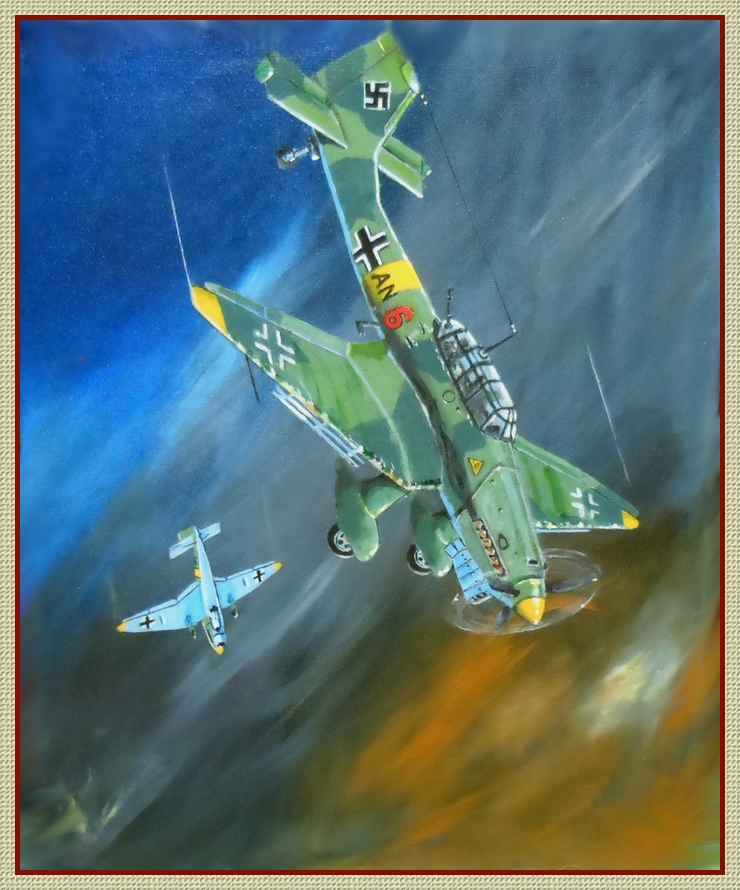 This is acrylic on canvas, depicting two early model Stuka dive bombers in attack mode.  The Stuka’s were obsolete by the time WWII began, but the German High Command liked them as a terror weapon, mostly because of the screaming siren in a dive mode.

The Stukas were built to take a pounding.  So, they were strong and very accurate with their payload, but they were not fast.  This made them an easy target for a British Hurricane or Spitfire fighter.   Ironically, despite their obsolescence, the German’s would not stop production of Stuka.  In fact, they were around right up to the end of the war, even though by then they were hopelessly outgunned and slower than everything else in the air except for a kite or a balloon.

The Stuka could carry one 500 lb. bomb or one 250 lb. bomb and two smaller bombs mounted under each wing.   Not an impressive bomb load, but remember, they were accurate and that scream they made in a dive made them a psychological weapon.

This bomber carried a machinegun and gunner in the rear seat facing backwards and a pilot.  The plane was strong enough to handle 6 g’s plus or minus…that’s a lot of g’s and most pilots would pass out if they tried it.  However, the Stuka’s had a safety feature that automatically leveled the plane, if the pilot blacked out while  pulling up from a steep dive, that was a handy gadget.

The fat wheel pants (fenders) were found most often on early 1936-39 versions, while the scoop on the cowling was found on newer versions.  I took a little artistic liberty and combined the two variants in my version.  Everything else is very authentic.

Few old war planes reflect the ugly, brutish and destructive side of war more than the infamous Stuka dive bomber.  That’s why I picked it.  I hope you will take a moment and just stare at the painting for 30 seconds.  Note the cold and warm colors, the contrast, the dizzying background, the ghostly look to the Stuka, its all designed to evoke strong emotion.  I think its one of my most powerful paintings to date.  But, what do think, that’s what matters….did I succeed?

This entry was posted in Art and tagged Birds of Prey., dive bombers, J. Lee Art, Stukas. Bookmark the permalink.