Can we just have an open, frank, bi-partisan conversation on healthcare?  Please…let’s look at the facts, absent the emotional outbursts and slogan-isms and think it through so we can vote smart.

We must accept the following truth or this conversation is dead before it starts:

At the present time Governor Gavin Newsom, as well as many California Democratic lawmakers, support a single-payer plan as presented in 2017’s SB-562; but it failed in 2017.  However, the idea is not dead, its going to be proposed again this year.

all existing health plans, including the state’s Medi-Cal plan, into a new state-run network.

Under this plan, there would be no medical co-pays and no deductibles. Californians would then either be in the state-run program or need to pay purely out of pocket for medical care. Private insurance would be illegal. Now what’s wrong with this?  Let’s take a quick look.

FACT:  Medicare is able to survive only because their rate of reimbursement for services is far below healthcare average cost and private insurance makes up the difference.  Medi-Cal would be no different. By dropping the reimbursement rate for all medical costs you drop wages!  In effect government would now control wages in the healthcare industry and those wages are headed for a decline.   When State B pays 30-40% more to their healthcare workers than State A, guess where most of the workers are going to go?  This is simple economics.

FACT:  Medi-Cal cost control will be applied to ALL services rendered.  This means an accountant has as much or more to say over your healthcare than your doctor.  It can be no other way.   Current estimates for a single payer in healthcare system in CA would be between $330 and $400 billion per year or about $10,000 per year per person. This cost would double the state’s current budget and even then we’ve probably underestimated.

HIGHLY LIKELY:  Future medical costs would rise sharply because persons with expensive medical conditions would be drawn to CA, much like our homeless are drawn here. 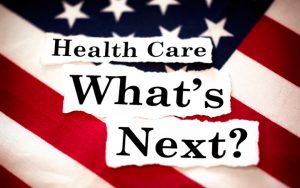 The often touted slogan, “You can’t be denied” is false. Procedures that are deemed by those running the state’s health board to be “too expensive” will indeed be denied or severely rationed. And you may need to wait in line a long time before receiving healthcare. To prove this you need only look at healthcare in Canada or the UK.

The country’s goal is to see 95 percent of patients within four hours, which is a goal that has not been achieved since 2015. It is now so obvious that the goal cannot be realistically met that the United Kingdom is considering to eliminate the goal.”

These are not wild speculations, these are documented, provable facts.  There’s more coming, so stay tuned!

This entry was posted in Health and Medicine and tagged CA., healthcare, medi-cal, single payer. Bookmark the permalink.

2 Responses to Healthcare in California