Did Trump say Something Racist about Baltimore?

President Trump recently tweeted a response to Congressman Elijah Cummings.  Cummins has been unrelentingly in his criticism of Pres. Trump.  Trump had enough and fired back:   “….As proven last week during a Congressional tour, the Border is clean, efficient & well run, just very crowded.  Cummings District is a disgusting, rat and rodent infested mess. If he spent more time in Baltimore, maybe he could help clean up this very dangerous & filthy place.”

In what way is this statement racist?  For that matter how is it not true?  I’ve been there and as an eye witness I can tell you Baltimore is filled with corrupt politicians who squander millions of dollars in federal grant money every year.

Yes, there are rats on the streets, sidewalks and alley ways.  There are bums, gangs and trash everywhere.  It is is a very dangerous place to be as crime stats prove.  It is my opinion that Baltimore makes Oakland look clean and we all know what filthy rat hole that place is.  In a survey of our 30 largest cities Baltimore was the deemed the most dangerous.

Then Baltimore Mayor Jack Young weighed in on the exchange, and he did not mince words.  Young called it “completely unacceptable” for POTUS to say such negative things about the city.  In other words, HE CAN’T HANDLE THE TRUTH.

“As the Mayor of Baltimore, I won’t stand for anyone, not even the alleged Leader of the Free World, attacking our great City or our representative to Congress.”   Lets take a look at Baltimore’s greatness:

From the Baltimore Brew – 2015: “…after an hour-long litany of Council members’ complaints about the city’s endemic trash, rampant rat problems and concerns about the effectiveness of street and alley sweeping. The agency had also announced that it would be ramping up its proactive rat abatement efforts. (didn’t happen)

Councilman Warren Branch was in rare form, going on a tirade about mattresses in the median strips and piles of trash in his district. He invited Public Works Director Rudy Chow to get in the car with him and go on a trash ride-along.”  Trash and rats have been a decades old problem.

CRIME:  By any measure of systemic urban collapse, Baltimore is, as Trump said, “very dangerous & filthy.” Among the largest 30 American cities, Baltimore has the highest crime rate, and is a close second to Detroit for the highest rate of violent crime. But for murders, Baltimore is second to no other city, with more than 50 homicides per 100,000 people. That puts Charm City in the ranks of Jamaica, Venezuela and El Salvador in terms of lethality.

Baltimore Fraternal Order of Police President Left ‘Speechless’ By Commissioner’s Crime Plan – Baltimore Police Commissioner Michael Harrison hoped to address this crisis with his recent crime plan, but Baltimore City FOP President Mike Mancuso said it will do little to help. First and foremost, they don’t have the staff – they don’t even have enough officers to respond to all 911 calls. That’s not to mention their lack of other resources.

In Mancuso’s statement you’ll also get a glimpse of his feelings toward Commissioner Harrison. Mancuso says he was left “speechless” by Harrison’s claim the city isn’t all that bad.

“This leads us to Commissioner Harrison’s recent public assertion that Baltimore is not a dangerous place; a comment which left me speechless,” Mancuso wrote. “For him to try to alleviate the public’s fear of being a victim of violent crime by stating that most suspects and victims know each other, is outright fantasy.”  (Harrison is a democrat)

Trump started his feud with Baltimore officials after House Oversight Committee Chairman Elijah Cummings (D-MD) confronted border patrol agents at a recent round of hearings. The president tweeted directly at Cummings, suggesting that the congressman focus on his struggling Maryland district instead of trying to upend his administration’s policies. 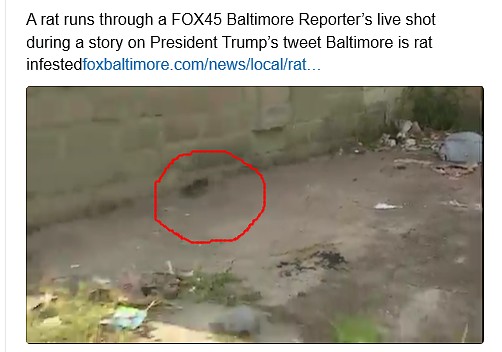 30 Responses to Did Trump say Something Racist about Baltimore?