I sure hope the local homeless don’t start brewing up this attractive looking berry hoping it  has some medicinal properties or that it might get them high.  It’s does have a powerful effect, but not that pleasurable.  Read this true account:

In Tennessee, a 68 year-old man was found by his wife sweating profusely, drooling, vomiting, and without any control of his bladder or bowels, before becoming unconscious. 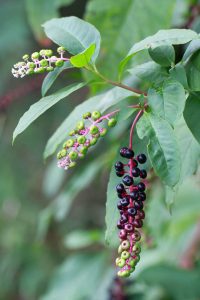 At the ER everything was basically normal, save for a blood pressure of 75/54 mm Hg and general weakness with inability to stand. Liver enzymes, ECG, CT scans, and “the works” were normal, and by the following day the patient was fine and discharged.

What caused this man’s insides to want to go outside? Pokeweed. He was suffering from a bout of constipation and remembered what his mother would make when he was a child: pokeweed tea. He picked pokeweed leaves and stems from a plant in his yard and boiled them up. He placed the concoction in the refrigerator for several days, until he was tempted by the ice-cold liquid on a hot, sunny day. Ten minutes later, fluids were exploding from every orifice. Safe to say, he was cured of constipation.

What devilish chemical, or chemicals, are responsible for this, and why would nature do this to us? Phytolaccatoxin is thought to be a main contributor, as well as various saponins – similar to solanine in green potatoes. There are countless other natural products, but given pokeweed’s history and cultural significance, there is surprisingly little known about them. I would be remiss, however, if I failed to note that there are multiple studies investigating the naturopathic properties of pokeweed, for indications such as cancer and HIV. Nothing has panned out, but hopefully these last two sentences will cut down on the deluge of emails I get from angry readers. Yes, even I get hate mail.

From the symptoms of our older gentleman, there seems to be a cholinergic effect with pokeweed, stimulating the parasympathetic nervous system, which you all remember as SLUDGE:

The pokeberry plant is all over Bidwell Park and can be found yards too.  It’s an interesting looking plant, very colorful, but please don’t eat the berries unless you want a good cleansing of your intestinal and urinary track.  This is another one of natures poison’s to be avoided!

This entry was posted in Uncategorized and tagged poison, pokeberry, pokeweed. Bookmark the permalink.