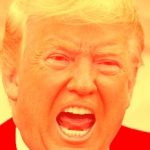 “As I have stated strongly before, and just to reiterate, if Turkey does anything that I, in my great and unmatched wisdom, consider to be off limits, I will totally destroy and obliterate the Economy of Turkey (I’ve done it before!). They must, with Europe and others, watch over “the captured ISIS fighters and families. The U.S. has done far more than anyone could have ever expected, including the capture of 100% of the ISIS Caliphate. It is time now for others in the region, some of great wealth, to protect their own territory. THE USA IS GREAT!”   President Donald Trump

If I have deciphered this tweet correctly,  Trump is saying if Turkey wages war on the Kurds or if they invade Syria, they can expect economic sanctions from the US.  As for watching over the captured Isis terrorists and their families, this is a little more clear.  It is in reference to the cost of keeping terrorists and their families in camps.  This is creating a serious cost burden for the US.  In many cases the country of origins for these Isis thugs  don’t want them back.  In the recent past, Trump has threatened to force repatriation.

Now this from Business Insider – 15 minutes ago:  “Turkey is a member of the NATO alliance, making it highly unusual for the US president to threaten economic war on an ally. Trump rebuked the Turkish and European governments and suggested they weren’t shouldering enough of the responsibilities in fighting the Islamic State.

“”It is time now for others in the region, some of great wealth, to protect their own territory,” Trump tweeted.

“The Turkish economy has been in the midst of a year-long recession with a battered currency and high inflation. Economists say the Turkish economy will contract 0.3 percent this year after a decade of strong growth. It’s not clear what actions Trump could take against the NATO ally.”

President Erdogan of Turkey is a dictator and he is fast approaching being a Muslim hardliner in defiance to Turkey’s secular status.   So, it’s highly unlikely that he will be moved by anything Trump threatens.  However, it could strain diplomatic relations to the point that we lose our two air bases in Turkey.   Incirlik is the main base.  It employs 5,000 airmen which includes Turkish and British Airmen.  The second base, Izmir, is more for NATO purposes, however Americans are also stationed there and we’ve done most of the construction and upkeep.  It would be a huge loss if we were evicted from these bases.

Erdogan has been a political figure for decades and more recently increasingly a religious nut-case.  But, until he achieved power in 2014 (he was voted in as President), he was a minor irritant to US policies.   Now, after his election and his strong hold on power he has started undermining free press and free speech and other Constitutional guarantees.  Four years after his election key military leaders attempted a coup that failed and now he’s become just another Muslim dictator.

It’s safe to say that Erdogan has never been a friend of the US, but with President Trump the relations have become extremely stressed.  Where this will end up is anyone’s guess.  But, I don’t like the prospects for equitable resolution.

For more on this breaking story, please follow this link.

Is anyone getting the least little bit worried that Trump really is a megalomaniac?  I have to admit, he’s got me worried.   As I close Trumps famous last words still echo in my mind…”…. in my great and unmatched wisdom, …. I will totally destroy and obliterate”

This entry was posted in Political Intrigue, Politics and tagged in my great unmtched wisdom, Kurds, Syria, Trump, Turkey, tweets. Bookmark the permalink.