Once again we are approaching that decision time where we pick the nation’s leader for the next four years. Because of the controversy surrounding every candidate, including the incumbent, one might argue we don’t have any good choices.   Well, this has come up before and we made the best possible choice and guess what?  It all worked out.

See, the framers of the Constitution knew this would happen on occassion.   Humans are flawed creatures, so we needed something to compensate for our personal shortcomings.  That is exactly why they gave us a federal government with checks and balances, what a great idea!

232 years ago Alexander Hamilton said good government is derived from reflection and choice, not by accident or force. To simplify this even further, Hamilton realized that 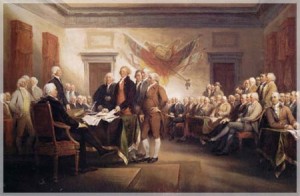 whatever would enhance freedom and consideration was good and anything that diminished it was bad.   The framers obviously concurred.  And to keep us from going off the rails, they prescribed strict limits to the power of each of the three branches of government, the Executive, Judicial and Legislative.  They felt that was necessary in order to avoid “elective despotism.”  And it’s been tested a time or too.  There’s been a few guys that tried pretty hard to point us in the wrong direction, but thanks to those original checks and balances, we’ve stayed on course despite them.

When you consider your next choice for president, ask yourself which candidate’s views will best enhance the freedoms detailed is in our Constitution and by our founding fathers?   If you can do just that much, you’ve done a lot and in turn your country will have a better chance to survive for another 4 years.

This entry was posted in Uncategorized and tagged presidential election, responsible choice. Bookmark the permalink.

8 Responses to Seeking the Better Choice