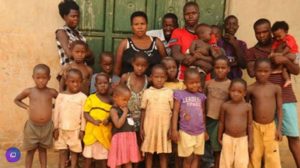 A woman from Uganda has given birth to a jaw-dropping 38 children, and surprisingly she is only 37 years old.

The mother, Mariam Nabatanzi, has delivered all her children at home except her latest addition who is now four months old, reports the Nairobi News.

The newborn had to be delivered by caesarean section at a local hospital.  The doctor who delivered the 38th baby tied the woman’s tubes so she could no long give birth.

The first of the babies began coming when Nabatanzi was married off at age 12 to a man in his 40’s.  The current father is no where to be found, he left allegedly because raising 38 kids was too much for him.