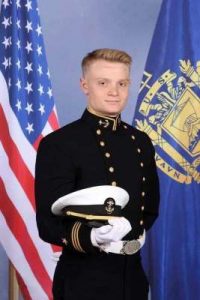 The following account is a condensed version of todays, MSN news story.

Benjamin Watson told the press, two men had been killed at the scene of the bloody attack at NAS Pensacola.  After the initial attack, his son, Joshua Watson (shown left) struggled to reach law enforcement officers just outside the navy training building.  His son, a naval officer, had been hit five times.  However, he was able to provide the location and an accurate description of the shooter inside which greatly helped the police stop the shooter.

Medical personnel would later transport Joshua Watson to the Baptist Hospital nearby, where he died from his wounds.

Benjamin Watson said Joshua is survived by two older brothers, and the best thing people can do for his family is to pray for every family that was affected.  “There are young sailors in the hospital fighting for their lives, and others in great pain and distress from the actions of this shooter,” he said with pain, pride and solemnity heavy in his voice.  “His mission was to confront evil,” he said. “To bring the fight to them, wherever it took him. He was willing to risk his life for his country. We never thought he would die in Florida.”

Saudi National, Ahmed Mohammed al-Shamrani, was training on the Naval Air Station Pensacola when he used an illegally obtained handgun to open fire in a classroom at dawn, officials said.

Note:  Since 2003 when the Iraq war began, there have been roughly 87 attacks on US personnel that were attempting to assist and train their attackers.  This number translates to about 19% of our total combat casualties.  The attackers nationalities were Saudi’s, Afghani’s and Iraqi’s, but 100% motivated by Islamic extremism.  This number does not include attacks by Muslim’s serving within the US armed forces or Muslim Americans attacking American civilians.  This number also does not include the number of attacks by foreign born Muslim terrorists on American targets.   From 1970-2011 there were a total of 2608 terrorist attacks within the US.

This entry was posted in Military, Police, Crime, Security. Bookmark the permalink.

1 Response to Shooting at Pensacola