Liberals and Rush Limbaugh Get a Big Surprise

During President Trump’s state of the union speech, he paused to bestow a rare honor on Rush Limbaugh.  At the time he was sitting in the gallery beside the First Lady, Melania Trump.  He seemed genuinely shocked when the president made this historic announcement.

Limbaugh received the Freedom Medal, the highest civilian award possible for his contributions to America and to the defense of the principles handed down by our founders. 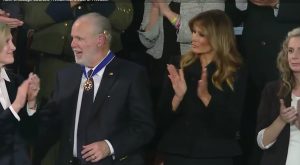 His radio career as America’s #1 talk show host has lasted for decades.  During that time  he has inspired many conservatives to take a stand against the insanity coming from the loud mouth, bullies on the far left.

Despite their (far left) attempts to censor him, scare off his sponsors and run him out of business, he only grew stronger and more popular.  Much to the chagrin of liberals, he was absolutely unbeatable in the ratings.  His ideas and thoughts on democracy were consistently brilliant and inspirational.  Yet, despite his fame and fortune he was always  courteous to the whiney progressive callers who often vehemently disagreed with him.

Limbaugh may well go down in history as the best there ever was at what he did, he set the bar so extremely high.   He was part showman, part patriot and part orator par excellence.

For conservatives everywhere, this award could not have happened to a more deserving guy.  For liberals, it was yet another agonizing defeat, one that caused generalized anxiety and depression across their socialist rank and file. Can you imagine how liberals must feel knowing their arch enemy shares this great award with Mother Theresa and Rosa Parks?  I think it was a brilliant idea and I’m glad he got it.

This entry was posted in News Media, Politics and Government. Bookmark the permalink.

2 Responses to Liberals and Rush Limbaugh Get a Big Surprise