What’s the Best Handgun in the World?

Glock pistols are by far the most popular brand of a handgun in the world and one of the most popular sidearms in America. Glock is a weapon of choice among a lot of civilian handgun owners, as well as many law enforcement agencies.  Many people would argue that a Glock 17 is the #1 handgun in the world today.  However, there’s another that is clearly the best when you consider the combinations of longevity, firepower, reliability, production numbers, features and most importantly, an original design that was way ahead of it’s time when it was first introduced.  That handgun is the Colt M1911.  This was John Moses Browning’s crowning achievement in a handgun.

In the the last 30 years I have never found a top 10 handgun list that did not include the venerable old Colt 1911.  It was a revolutionary design that has stood the test of time and combat.  There are just too many things about a Colt 1911 that over shadows the competition.

At the turn of the last century the United States was engaged in a conflict with Moro tribesmen in portions of the Philippine Islands. The U.S. had seized the islands as a protectorate and one of the spoils of war at the termination of the Spanish-American War. In May 1899, 800 U.S. Marines landed on the island of Jolo. Initially things were relatively peaceful, but a series of mis-translations of a treaty led to the Islamic Moro people to instigate hostilities. Among the Moro was a faction called “juramentado,” Spanish for “one who takes an oath,” an extremely zealous group of Muslims who felt it was their honor-bound duty to kill all Christians. The juramentados were fierce fighters who reputedly bound parts of their bodies prior to combat to reduce bleeding and took local drugs to minimize the perception of pain. 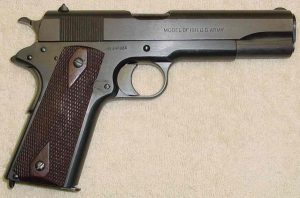 Unfortunately for many U.S. officers, the government had replaced the heavy—but quite reliable— .45-caliber Single Action Army with a lighter Colt double-action revolver. Chambered in .38 Long Colt, the Colt New Army 1892 was a beautifully made gun, but its ballistics—a 150-grain, round-nose lead bullet at 770 fps, yielding 195 ft.-lbs. of energy—were pretty anemic. Even during the war with Spain, the revolver didn’t cut it for American forces. When put up against the Moro juramentados many officers learned of the cartridge’s shortcomings the hard way. Reports of juramentados absorbing a cylinder-full of .38 Long Colts and still beheading the shooter with a keris knife were disturbingly regular. In something of a panic, the Army reissued Single Action Army revolvers from reserve stocks, and purchased some M1902 .45 caliber double-action revolvers. The Ordnance Board established an evaluation committee led by Col. John T. Thompson (inventor of the Thompson submachinegun) and Col. Louis A. La Garde. They determined the need for a semi-automatic pistol that fired a .45-caliber bullet in order to reliably stop close-range combatants.

When the Army announced its intent to replace the .38-caliber revolver with a .45-caliber pistol several companies leapt at the chance for a lucrative government contract. John Browning had already been developing a semi-auto pistol for Colt designed around a .38-caliber cartridge similar to the .38 Super. For a genius like Browning, it wasn’t too difficult a task to upsize both the pistol and cartridge to .45 caliber.

The pistol trials began in 1906, and samples from Colt, Savage, Smith & Wesson, DWM, Knoble, Bergmann and White-Merrill were tested. Both the Browning and Savage designs were selected for further testing. That testing revealed some shortcomings in both pistols, and the Army asked for more refinements in the designs. Browning traveled to Hartford, Conn., to supervise the changes. He teamed up with a young Colt employee, Fred Moore, and they painstakingly ensured that the pistols to be submitted were the finest they could produce. On March 3, 1911, the Army began a torture test. Each pistol would be fired 100 times, then allowed to cool for five minutes. After each 1,000 rounds the pistols would be cleaned and oiled. After 6,000 rounds, the pistols were tested with deformed cartridges, some with bullets seated too deeply, others not seated enough. The test pistols were soaked in water, mud and even acid. Browning’s design passed every test without a single failure—the first of any firearm to survive such a 6,000-round test. (A Pearl Harbor Commemorative .45 is shown left) 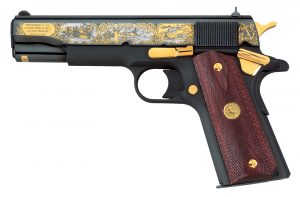 911, the Ordnance Board released a report of its findings that said, “Of the two pistols, the board was of the opinion that the Colt is superior, because it is more reliable, more enduring, more easily disassembled when there are broken parts to be replaced, and more accurate.” Nine days after that report, the Army designated the Colt Automatic Pistol, Caliber .45, M1911 to be its official sidearm. Two years later the Navy and Marine Corps adopted the 1911 as their handgun as well.

To continue reading the history, please click the link.

4 Responses to What’s the Best Handgun in the World?