More Injustice Against Police? A Trial is Pending

There is no showing whatsoever that the inmate was treated any differently because of his race and that the officers did not do everything their training demanded.  As a result of public pressure brought on by the media, 5 former officers were dismissed including a registered nurse.  They are currently being investigated for involuntary manslaughter!  The video, shows 3 black officers, 2 white officers and the white female nurse all trying their best to take care of an inmate who was suffering some sort of seizure. Watch the video of this and you will see the care and compassion they offered the inmate.

You will note the professional conduct of the team as they moved the inmate to a place where he could be treated.  At no time did anyone say or do anything that would indicate anything other than trying to help the inmate.  He has brain damage and he’s out of his mind.  They used handcuffs to restrain him from hurting himself.  He’s struggling and the he breaks the cuff key off in the handcuff.  He was face down in order to cut the cuffs.

The response team was patient, methodical and tried repeatedly to calm the inmate the whole time he was having a brain seizure.   Despite all this effort, the patient’s underlying medical condition caused him to die two days later in the hospital.  For that unfortunate death the police are vilified and the inmate is now treated like a martyr.  The Sheriff apologized to his family and named a wing of the jail after the deceased and terminated all the personnel involved in the attempted rescue.

Why he was in jail in the first place was never mentioned, but apparently it had something to do with attacking a female. 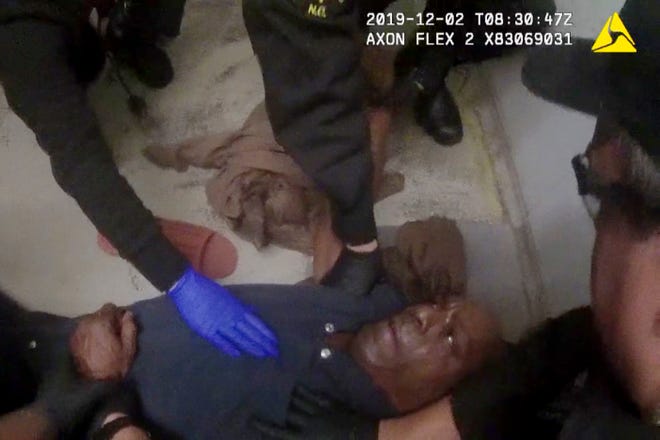 USA TODAY – Videos released Wednesday show an incident at a North Carolina jail that lead to the death of a Black man who was restrained while having a medical emergency last year.

Several news organizations, including The News & Observer and The New York Times, petitioned a judge to publicly release the videos that show officers “hog-tying” John Neville, 56, who died of a brain injury in December three days after police arrested him.

One of the videos runs nearly 20 minutes and is from the body camera of one of the five detention officers involved, who were all fired last month. Another is almost 26 minutes. Over the course of 45 minutes of being held in an observation cell, Neville would “sustain injuries that would eventually cause him to lose his life,” Forsyth County district attorney, Jim O’Neill said last month. Both were reviewed by USA TODAY.

The Forsyth County Sheriff’s Office did not publicly acknowledge Neville’s death for more than seven months. Sheriff Bobby Kimbrough previously said he withheld word of Neville’s death at the request of the family and their attorneys.