Seattle Has Begun the Police Cuts – More to Follow

First they voted on a resolution to defund the police by 50%, now they have started down that path.  The Chief’s salary will be cut by 40%, about 100 officers will be fired. 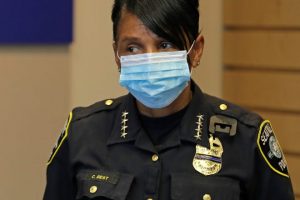 The Seattle City Council voted Monday to move forward with a controversial proposal that would begin the process of defunding the police department.  (Chief Carmen Best is shown on left)

The 7-1 vote comes despite objections from the city’s police chief, mayor and the Seattle Police Officers’ Guild.

The plan would ultimately slash funding to the department but not the 50% some had sought. Seattle currently has around 1,400 police officers, and the current plan would see about 100 cut. It was also cut the police department’s $400 million budget by about $3 million, according to KOMO.

Councilmember Kshama Sawant was the sole “no” vote because she felt the proposals didn’t go far enough, while Debora Juarez abstained, according to MyNorthWest.com.

The council reviewed a final set of amendments Monday before the vote, which included reducing the police department by up to 100 officers through layoffs and attrition as well as cutting the $285,000 annual salary of the Police Chief Carmen Best and other top officers. Best is the city’s first Black police chief and the pay cut would put her salary well below her White predecessor.

The council’s plan also removes officers from a team that dismantles homeless camps.

“While we can’t do everything in this summer rebalancing package, we have set the path forward for tremendous work in front of us as a council and as a city,” Councilwoman Teresa Mosqueda said.

The move to defund the city’s Navigation Team, and redirect the money to homeless outreach services such as REACH will “dramatically restrict the city’s ability to address unauthorized encampments,” Jason Johnson, Interim Director of Seattle’s Human Services Department, wrote in a letter to the council last week.

Some council members have said the initial cuts are a first step to more sweeping reductions and a rethinking of law enforcement in Seattle.

“It’s important to show community members that we hear them, that we’re working towards the same goal,” Councilwoman Teresa Mosqueda said last week.

Mayor Jenny Durkan and Best have urged the council to slow down its discussions about police budgets, saying the issue can be taken up in earnest when the 2021 city budget is considered. They also argued any layoffs would disproportionately target newer officers, often hired from minority communities, and would inevitably lead to lawsuits.

The police chief has resigned in protest.  Carmen Best, Seattle’s first Black police chief, announced she is stepping down Monday after a city council vote approved cutting the budget by nearly $4 million and reducing the department by as many as 100 officers.

This entry was posted in Uncategorized and tagged 2020, police cuts, Seattle. Bookmark the permalink.