Women in Combat – A Failed Experiment 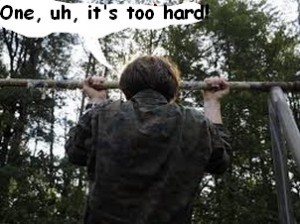 55% of female Army and Marine recruits can’t even do three pullups, the minimum standard that was supposed to take effect with the new year, prompting the Marine Corps to delay the requirement, part of the process of equalizing physical standards to integrate women into combat jobs.

Capt. Maureen Krebs at Paris Island said, “The Marines had hoped to institute the pullups on the belief that pullups require the muscular strength necessary to perform common military tasks such as scaling a wall, climbing up a rope or lifting and carrying heavy munitions.

Officials felt there wasn’t a medical risk to putting the new standard into effect as planned across the service, but that the risk of losing recruits and hurting retention of women already in the service was unacceptably high,” she said.

In order for a female recruit to score excellent they must hang from a bar for 70 seconds, however this test is considered so easy and pointless it was not even considered for male recruits.

Female recruits showed alarming weakness in all areas of physical testing, plus they were more prone to injury and they have a retention problem, hinting that we can’t afford to place them in combat roles.

Long term recon patrols where soldiers are required to spend 10 days in the field, void of proper hygiene, took unacceptable high tolls on females. They were extremely susceptible infection and debilitating skin rash, the men fared far better because of their physiology.

The cost of training, the lower physical standards, poor retention and costly injuries from female combat recruits can’t be ignored. So far, the physical deficits have been offset by our technological edge and male soldiers doing even more to take up the slack to give us an overall battlefield superiority. However, that edge ends when it’s a one on one fight to the death with a determined enemy. This is now the difference between life and death – winning and losing. Can it be anymore clear?

Like the NFL, this is the major leagues and you either cut it or you don’t.   This is not to say women can’t have many valuable roles in the military, but combat shouldn’t be one them.  When it comes to war fighting our first line must always be our best.   Political correctness does not belong in this equasion.   We owe that much to the troops that we send in harms way, they shouldn’t have to take up the slack for anyone.

This entry was posted in Uncategorized and tagged army, dropout, failure, soldiers, troops, USMC, women in combat. Bookmark the permalink.

23 Responses to Women in Combat – A Failed Experiment