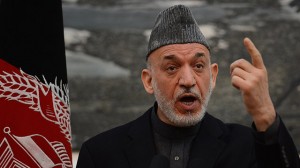 Did you hear the latest about Afghanistan’s president, Hamid Karzai? This screwball wants to pardon a bunch of Afghan’s who were locked up for attacking US soldiers. Today’s headlines read, US Tries to Block Release of Dangerous Prisoners. Read the full story here.

Maybe he thinks all his bad mouthing of the US while befriending of the Taliban will somehow allow him to stay in power when we leave and the Taliban taken over again, but I seriously doubt it. There’s a better chance Karzai will wind up swinging from a light pole.

Karzai is a nut with unpredictable mood swings and he can’t be trusted, the man is truly unstable. There’s hardly a week that goes by that he’s no doing something to undermine the fragile progress the US has been able to make shoring up their military and opening up the country to the modern world. Many of us wonder why were still there with this guy knifing us in the back at every opportunity?

When we do decide to leave, and it may be sooner than was projected, the real losers will be Afghanistan’s female population. Over 1 million have been allowed into school for the first time. They are no long forced to stay at home and make babies. They are no longer forced to marry some old guy at age 6 or 7, because the child molester paid off their father.

Under the Taliban a woman attempting to get an education was just as likely to get a face full of acid or worse. The enslavement of women and their mistreatment by Afghan men, especially the radicalized Muslim males is legion. We can only hope that exposure to more enlightened cultures has moderated the average male attitude, but I doubt it. These guys are child-rapers (both boys and girls) and troglodytes for the most part.  In the old days Romans would have killed every one of them and started over.   But, today we just want to go home… and start over.

6 Responses to With Allies like Hamid Karzai Who Needs Enemies?