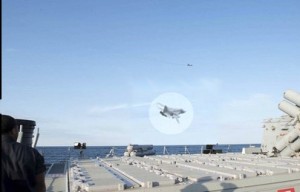 Twice recently the Russians have buzzed US Navy warships in a provocative manner that could have spelled disaster had it been an actual attack. The aggression was not by some rogue pilot either, the two incidents were obviously staged to see what kind of a response they would get. The picture to the left shows a Russian jet flying past a destroyer in open waters in the Baltic Sea.

Putin knows that short of sinking a warship with all hands, Obama won’t do a thing and there’s a fair chance they could get away with sinking a U.S. warship and call it an unfortunate accident. Obama’s lack of leadership, his inaction on so many fronts, particularly in Syria, has put our men and women in the military at an unnecessary risk. The threat of force or the use of force is not something Obama feels comfortable with and he seems to have no grasp of the potential of our US military. His military advisers and even his Secretary of Defense, rarely last more than a year before they are fed up or fired.

I honestly believe that even that the far left dove, Hillary Clinton, has more courage and resolve than Barack Obama and that she would take a more decisive action under the same circumstance. Granted, it may not be much better, but anything would beat what Obama has done…which is nothing. Too bad he wasn’t as hesitant at issuing presidential orders that undermine our Constitution. Putin must be laughing back in the Kremlin, wondering how far do I have to push this Obama guy to get a rise out of him?

This entry was posted in Uncategorized and tagged buzzing us warships, Obama, putin, russian jets. Bookmark the permalink.