Could We Have Another Watt’s Riot?

Is California a political tinderbox, ready for the slightest incident to touch off a Watts-like riot? A number of law enforcement officials think so and are expressing growing concerns that we may be in for big trouble this year.  (Below left – 2006 photo of Hispanic protest march in L.A.) 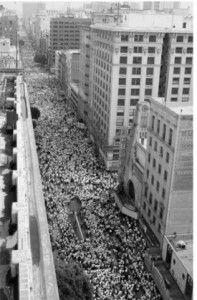 For the last 30 years the Hispanic population in California has been surging.  Along with change in the demographics came a host of “Hispanic only” political issues which served to divide the former powerful from the new arrivals.

Special political needs and fast paced activism resulted in a quick change to the racial composition of the state legislature.  It’s now heavily weighted with Hispanic surnames.  The Members of the California Latino Legislative Caucus report they now hold 13 leadership positions in the Legislature, including Chairs/Vice Chairs of legislative standing committees and 5 leadership appointments in both houses.

Illegal immigration and border control have been like an open wound to Californians, no matter which side you favor, it’s been frustrating.

Ingredients for combustion:  Over 58% of all Hispanics in California are concentrated in and around Los Angeles and this has also been a democrat stronghold.  In SoCal the Dems outnumber all other parties by a wide margin.  This area is also known for some very rough sweatshops, agriculture and other places of exploitation of illegal immigrants willing to work for low wages.

High crime and gangs exacerbate to the social and economic pressures in SoCal.  In the last decade the culture clashes between Hispanics and others (mostly whites) has resulted in numerous protest marches, punctuated by increasingly violent incidents. One of the largest protest marches occurred in 2006 when roughly 500,000 Hispanics took to the streets in Los Angles to Sacramento over mostly labor issues, but also housing, education and discrimination issues.

This election year (2016) has two of the most divisive candidates ever to run for this nation’s highest office.   Hillary Clinton and Donald Trump.  Hillary has been fanning the flames of discord and Trump has been pouring gasoline on them.  Just the name “Trump” brings a highly negative reaction among many democrats and Hispanics.

Need I remind you that the Watt’s riot began with a single drunk driving arrest?  Today the racial climate is every bit as volatile as it was back in 1965, if not more so.  In 1965 3000 arrests were made and 14,000 police and national guard were called out to restore order.

Over $40,000,000 in damage occurred in Watts in just two days and that’s in 1965 dollars.  The race riot began to spread to other nearby communities, but they were quickly put down by the fast actions of the police and National Guard.  Due to the seriousness of the riots, martial law had been declared. Sergeant Ben Dunn said “The streets of Watts resembled an all-out war zone in some far-off foreign country, it bore no resemblance to the United States of America”.   Hold that thought. 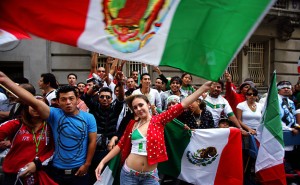 It wouldn’t take much for this to happen again. But, we may be less prepared to handle it today than we were back in 1965.

The opposition (Hispanic and black minorities) are much larger and much better organized. The communications via the social media allows the spread of violent ideas faster than police could possibly react too, thus insuring billions in property damage and worse would occur in a major riot.   A riot in California today, leveraged off the racially charged atmosphere, could flash across the state and possibly the Nation.  There are too many thugs, criminals and radical political elements around, primed and ready to take advantage of anarchy.  There is little doubt that law enforcement would be overwhelmed and so would the National Guard.  The National Guard in California is nowhere near prepared to restore order in the event of major rioting.

6 Responses to Could We Have Another Watt’s Riot?