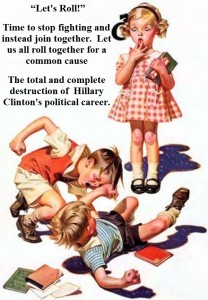 I for one do not like the result of this primary race, but who would after they put their heart and soul into wanting to win. It was a classic battle, but Trump won. Just like military academies teach the logistics of some of history’s greatest battles of war, so too will this epic battle be taught for generations to come by Political Science instructors. The lessons learned will affect the way politicians run their campaigns for decades.

Both sides got down and dirty, as they obliterated the detente that made everyone speculate as to why they refused to attack each other early in the campaign. Often times even those who are the best of friends can have the nastiest of breakups.

The first murder in history was Cain killing his brother Able. In many divorces two people, who once promised togetherness till death do they part, actually turn their children against each other as their reputations and character get destroyed in the court of public opinion. Well the Trump/Cruz war did not fail to entertain the MSM, as supporters of both sides took things so personally that even family members ended up with strained relationships.

Being the youngest of 8 children I have seen my share of rough and tumble: knife throwing, dinner destroying, hair removing, black eye, and fat lip arguments over things that only siblings could lose it over. Well ladies and gentleman, like my parents said when enough was enough, “It’s over, it’s time to let it go!” Time to head to your own corner to calm down and reconsider who the enemy truly is in this bitter election.

The Republican party is a big family with many factions. For many of us, it’s become somewhat of a dysfunctional family, but still a family. I would advise everyone from both sides of the Trump/Cruz fight to do as our parents told us to do when we were fighting with our beloved brother or sister. Drop it, and make up. Stop already with the insults, and accept defeat as a gracious loser or be humble in your win. Nothing good will come from those who are unable to drop the weapons and shake hands.

As for not voting for Trump in the General. Let me make this perfectly clear, with no ambiguity. When the Republican Convention anoints their candidate, regardless of who it is, I will vote for that candidate in November. I would just as soon murder my whole family and pop a cyanide pill in my mouth before I allow my vote or non-vote to get any Democrat elected to the White House. There is no greater threat that remains of our freedoms than Hillary Clinton becoming the leader of this once great nation.

We can sometimes agree and disagree so vehemently that things can get rough and tumble as we verbally throw knives, pull hair, and give each other black eyes and fat lips. Right now I advise everyone to step back and regain your sense of direction as to what the true goal is. Using the last recorded words of a Great American, which echo in my head when the going gets tough, I offer this phrase to all. “Let’s Roll!” But let us all roll together for a common cause, the total and complete destruction of Hillary Clinton’s political career.

67 Responses to Let’s Roll Together