In Defense of our Culture and our Country

Seems like anytime a person says we ought to protect our border with Mexico (because of drugs, crime, illegal immigration, disease control, pollution and general safety reasons) they are labeled a xenophobe (a racist). The person/s defending our country could be Asian, White, Hispanic or Black, it doesn’t matter because the left will play the race card. See, it’s all about labels for them and the nastier the better! Labels divide people and when people are divided they are easier to defeat, it’s the simple and that obvious. Where did the left learn to be so blatantly devious? That’s a rhetorical question, but it’s something you ought to think about. But, the point is, the rabid left has crafted insults and used mockery to manipulate voters for decades. 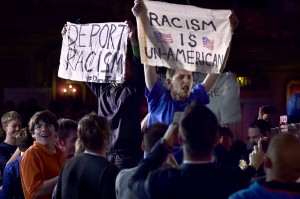 We’re coming up to an election unlike any I’ve ever seen or that we are ever likely to see repeated in our lifetime. We’ve finally got a candidate (Trump) who is not afraid to say what he thinks. However, when that happens you have to take the good with the bad. And you know there’s going to be controversy, the medial loves controversy and they will make the most of it, so we have that going against us. But, we can handle it, and we’re already handling it. Trump’s candor isn’t that shocking, we get where he’s going and for the most part we usually agree with him. But, the left has this endless supply ammunition to exploit, thanks to Trump being Trump.

Candor is refreshing. I’ve always felt it’s better to know what’s on a politicians mind and deal with it than to be treated like the proverbial mushrooms. I’m sick of being treated like a mushroom, aren’t you? That part has morphed into a version of political correctness, which today has all but censored blunt, honest political speech. But, they nicey-nice PC talk is still… BS.

I’ve had it with the BS, save that for the real mushrooms. And I’ve had it with the phony, professionally crafted candidates, saying whatever is necessary to resonate with the greatest possible number of voters. That’s still manipulation and it’s no better than the race card. ENOUGH already!

Our challenge today is to deny these elements their devious manipulations and hold firm to our common sense and our beliefs in American idealism. When in doubt, we should fall back on the time tested truths our founders gave us. You won’t find many of their ideas and ideals in a Hillary or Bernie speech, because these two characters are completely off the rails when it comes to understanding our heritage and our legacy. They don’t have a clue what it means to protect our borders, language and culture.

As good citizens, as voters, as people who understand what makes this country great, we ought to follow the lead of Donald Trump and be just as outspoken and politically incorrect as he is. You might be surprised to hear how many of still believe in the American dream if you do. Sure, it takes a little courage to do that, because you are going to tick off the lefties. You are going to be called ugly names… for daring to protect your country from invasion. However, that’s a small price to pay compared to what we’ve paid in the past to defend this nation, isn’t it?

So, be prepared to speak up! Be prepared to say you support the rule of law! Be prepared to say you support a fair and well managed immigration policy. Be prepared to tell the world that you are an American first and foremost, then you are Irish or Peruvian or Lithuanian or Spanish, etc.. Let people and the politicians know your honest, heartfelt desire to protect this nation and keep it safe from drugs, crime and invasion. If doing that requires a secure Southern border with Mexico, then so be it. If electing a guy like Trump, who is sure to offend the delicate sensibilities of the politically correct crowd, then so be it. This is our country, founded on our idealism, with our foundation 100% defined in the Constitution and the Bill of Rights! That’s us and we better not lose sight of that.

It’s been a long struggle to promote and defend our noble ideals. It hasn’t always been a perfect country, but we were always on tract to fulfill the founders vision that was. So, if you want to genuinely be part of this great experiment in liberty, then you have to speak up and not be afraid. Defend what you know is right about America and don’t be timid about it.

58 Responses to In Defense of our Culture and our Country