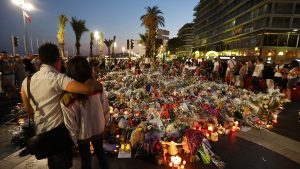 Over the last eight years the fight to destroy radical Muslim Terrorism has been fundamentally transformed to fit globalist ideals held by the radicals this nation brought to power. Over the last eight years this brutal enemy has grown in strength and reach to threaten from within in our neighborhoods and in neighborhoods across the globe. Barack Obama, Hillary Clinton and John Kerry have created terrorist chaos in the Middle East and unleashed nuclear Iran. Because the administration failed to plan ahead to create safe zones in their war plans there are millions of refugees flowing into Europe and America. Some are and have been creating no go zones making law enforcement and investigations nearly impossible. This is hope and change that threatens not only our lives but also our way of life. Terror attacks, rapes, assaults, no-go-zones and the advancement of radical Islam is not change for the better. It is disaster of epic proportion! We are told this condition is “the new normal.” We are told we are making “progress.” We are told that these “lone wolf” attacks are just something we must live with and accept. We are told the FBI and law enforcement are doing all they can…but have their hands been tied through language, manipulation, and PC?

Our leaders are attempting to pull the wool over our eyes and excuse their failures. This administration and their media mouthpieces have lied to the American people over and over again and the lies are deadly. One such lie is that of the lone wolf. As Andrew McCarthy pointed out in his recent article, “DEADLIEST LIE: Without ‘Lone Wolf’ Lie, U.S. Could Have Stopped Nearly EVERY ATTACK”:

Virtually every time a terror attack has occurred, the actor initially portrayed as a solo plotter lurking under the government’s radar turns out to be — after not much digging – an already known (sometimes even, notorious) Islamic extremist.

McCarthy bases his assertions on the work of Patrick Poole who coined the term “known wolf”:

As we follow the ongoing news about the manhunt for this weekend’s NY-NJ serial bomber Ahmad Khan Rahami and his capture yesterday, we can already add Rahami’s name to the growing list of “Known Wolf” terrorists. Yesterday, Catherine Herridge of Fox News reported that Rahami was already known to law enforcement authorities…

This follows a pattern of denial and obfuscation that marks this administrations approach to governing in which language is altered to advantage and advance their own radical and extreme agenda. We are told again and again that what we see before our eyes is really something else. War isn’t war at all, it’s an overseas contingency operation. Terror attacks in America aren’t carried out by radical Muslims but are random acts carried out by troubled individuals, lone wolves that have no direct connection to (radical) Islam. We should not “rush to judgement” when those who commit these acts of war scream Allahu Akbar as they commit mass murder in the name of their god.

Hillary Clinton is one of the liars. She wants your vote. But her record in this flagrant package of lies and misdirection renders her ineligible for anyone who is tired of homegrown attacks, tired of the waste, death, and loss of progress in the war, tired of the horrific mess this administration has made. Given Hillary’s deplorable participation it isn’t surprising that the Army lists Hillary as a security threat! The administration has not just made our world more dangerous and chaotic they have deceived the people at every turn. Who better to deliver yet another batch of deceitful rhetoric and lies than a bunch of actors…really? They can stand on this stage and pretend Hillary Clinton represents the choice that will do better? Well that’s what actors are paid to do, right? They are paid to make you believe that a lone wolf isn’t really a KNOWN wolf and his attack unconnected to radical Islam and terror.

The wolf at your door is being enabled by globalist wolves who use this condition to their advantage and to advance their goals for unchallenged control. They must destroy the ideals of individual liberty and free speech and they don’t care what it takes…war, militant unrest, swarms of refugees or murdering the language! Up is down and down is up. None of what is happening is real. Everything is fine. The chaos and unrest is normal.

Do you buy it?

This entry was posted in Constitution and Law, Education, Religion. Bookmark the permalink.

23 Responses to Lies and Deception: Lone Wolf or Known Wolf?