This is painful to write, but in my opinion Trump has lost the election. I decided this last night after I watched the 2nd debate. So, unless some last minute scandal breaks, Clinton has got it. Polling supports what I felt after Sunday’s debate and the latest and most accurate polling shows Trump going down like the Titanic.

Like it or not, the Trump-Bush tape was the final straw for too many. It has snowballed into an unstoppable mess from which there is no return. Sure, “the Donald” was done in by clever operatives for the Clinton campaign, no doubt about it. They’ve now convinced enough people that Trump was a terrible person who should never be elected. And from the very first day that Trump emerged as the front runner, its been a barrage of personal attacks and mudslinging by the Clinton camp.  Its gone a long way to cripple Trump’s campaign and that part is disgraceful.   However, Trump should have been better prepared for this and he wasn’t, something I think was due to his inflated ego.

The Clinton operatives didn’t do this character assassination entirely on their own, you must know by now that Trump set himself up… as an unwitting participant in his own destruction. I must emphasize the word “un-witting.” Donald blew it and he did so foolishly, if not stupidly.  Time after time he caused his campaign to be damaged by ill considered, off-the-cuff remarks.  When you are running for president words really matter!

These were naïve, amateurish mistakes that provided a bonanza of ammo to his opposition! Too many times Trump’s damage control team found themselves shocked and stunned by what Donald just said. This was generally followed by trying to explain what the Donald really meant. 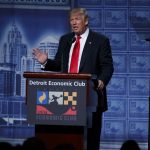 Of course this was not all bad, Trump’s candor was refreshing – when he stayed on topic and addressed the issues!

The public was desperate for an independent outsider willing to tell it like it is and Trump looked like the right guy, he had such great promise. Even though Trump often said things that were politically incorrect, it was what was on his mind and on the minds of so many angry and frustrated voters.

We’ve all witness too many politicians say one thing and do another, to the point we don’t trust any of them and then along comes Trump talking honestly. That launched Donald right past the traditional establishment candidates. But, there’s a broad line between being an endearing political novice willing to take chances for the sake of honesty and being a political chump saying stupid stuff that will get him destroyed. Donald crossed that bright line many times…too many times.

You have to wonder, why would an otherwise smart guy like Trump regularly set himself up for criticism like he did? The answer escapes me at the moment, but if I had to guess I think it was because he felt his over the top remarks would keep him out in front with the media. It did. It was a cheap form of advertisement (the media loved his banter because it sold) and so for a time it worked for him, but he also was seen as a lose cannon among many in the GOP. His fellow GOP candidates couldn’t match his style of play, they were locked into traditional campaigns and just as bad, they all had some baggage that comes from being a career politician.

Donald’s political incorrectness was indeed his greatest attribute (and liability). His attention getting comments demonstrated to his base that he was not afraid to be bold and say what he really felt and to the fence sitters, well, he came off as a little scary.  Along with that boldness came the mistakes and I cringe when I think of them, because I wanted Donald to be the guy we could trust.   Some of his mistake were just downright stupid and did not reflect the values of the Republican Party he is now representing. “We’re going to build a wall and Mexico is going to pay for it,” was never realistic agenda and nobody I know within the GOP even remotely considered that as a party plank. It was just one of those crazy attention getter things.

Over time, the litany of easily avoidable traps, gaffs and faux pauxs began to weigh heavily on his campaign. Then came the Trump-Bush tape and at the wrong time. I won’t defend what he said, but it was a far cry from what many other democrats have done and they got a pass.   Can you guess the word that fits nicely here?  How about, hypocrisy?

Trump says he is no longer that kind of man, and he has apologized, but the damage this time was too much and like it or not the Hillary machine nailed him.

The Washington Post writes, “Republican leaders began to abandon Donald J. Trump by the dozens on Saturday after the release of a video showing him speaking of women in vulgar sexual terms, delivering a punishing blow to his campaign and plunging the party into crisis a month before the election. Fearing that his candidacy was on the verge of undermining the entire Republican ticket next month, a group of senators and House members withdrew support for him, with some demanding that he step aside. Mr. Trump, however, vowed to stay in the race.”

His Vice Presidential nominee, Mike Pence, just said he needed to take some time off from the campaign and that he couldn’t help Trump with this one. Although Pence is staying with Trump, too many Republicans are not. The Speaker of the House, Paul Ryan, will no longer be promoting Trump for president, although he has stopped short of formally withdrawing his endorsement. Ryan said Trump’s campaign is essentially over and it’s time for the GOP to try and protect their control over Congress, which is now at risk. We’ve never seen anything like this before, this is an historic event that hopefully will never happen again.

My personal take is the Trump tape was wrong, it was demeaning to women and he can’t be seen as a good role model, should he become our leader. But, was this kind of talk unusual, especially around Washington? Heck no!  And after all it was said 11 years ago! But, there sure is a lot fake outrage over it.

Look, the list of men in power who have at times acted inappropriately in office and flirted with scandal is as long as you care to look back to find it.  Humans are flawed, so if they were all exposed for their scandalous behaviors and they were ALL held accountable, we would never have had an FDR, Kennedy or Clinton (all democrats by the way).

I’m not excusing Trump, I’m just saying what he did was not unusual by Washington standards. Men can be pigs, especially powerful men, gee what a shocker! So, the liberals should not act too offended over something said 11 years ago when Trump was a democrat!   The dems have never be known to raise the bar for piety. Liberals who don’t want to be called a hypocrite ought to be far more shocked at William Jefferson Clinton’s sexual escapades while in office, than Trumps decade old locker room talk.  Clinton’s behavior went far beyond mere words, and lets remember it all happened while he was under oath as a public servant and holding the public trust. 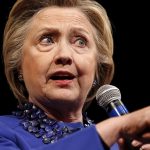 Speaking of the public trust, that brings us back to Hillary. She has so many flaws that are being overlooked right now by the very people pointing fingers at Trump its almost comical.  Hillary has serious flaws, some that could threaten our national security and yet we are going to make her our next President by default?  Go figure?

She’s a proven liar, willing to do and say anything to promote herself. And we know she’s absolutely connected to big money in Wall Street and elsewhere. Its already resulted in many instances of abuses of her public office. One can only wonder what she will do when she is unleashed as President of the United States? That is such a scary thought it makes me ill to think of it.

However, lets take comfort knowing that our founding fathers gave us a system of checks and balances for just such an occasion, so that we might not fall victim to a single corrupt entity like the Clinton’s. If Hillary gets it, do not fear my brothers and sisters, we will survive. Heck we survived Obama for 8 years, and he is much more dangerous than crooked Hillary.

Hillary, as bad as she may be, is at least schooled in the art of politics and we know she can hold her composure under great stress and when it really matters, like lying to Congress. And I’m told by a person close to her, that she knows how to take sound advice to get out of a jam. So, yeah, we could do worse…but, that’s about all I’m going to give her.

Give me a candidate I can believe in, one that I know will be good for America and I will stand in that little voting booth and do my duty, but right now, I have serious reservations about voting at all.