Now This is What Gun Control Should Be

A Canadian military sniper took out an ISIS fighter with a record-breaking shot from more than two miles away, according to a report in The Globe and Mail, though some initially cast doubt on the claim. 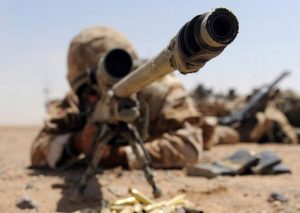 The unnamed sniper who carried out the feat was a member of Joint Task Force 2, an elite unit in the Canadian army similar to the US Navy’s SEAL Team 6. The shot, according to the paper, disrupted an ISIS attack on Iraqi security forces.

“The bad guys didn’t have a clue what was happening,” one source told the paper.

The report said the kill was verified by video and other data, though it was not made public. The kill shot from 3,540 meters, or about 2.2 miles, beat the previous sniper record set by British army sniper Craig Harrison from a range of 2,475 meters, or 1.5 miles.

Soon after the Globe and Mail story was published, Canada’s Special Operations Command released a statement confirming the shot.

“The Canadian Special Operations Command can confirm that a member of Joint Task Force 2 successfully hit a target at 3,540 metres,” the command said. “For operational security reasons and to preserve the safety of our personnel and our Coalition partners we will not discuss precise details on when and how this incident took place.”

Prior to the statement’s release, Thomas Gibbons-Neff, a reporter for The Washington Post who served as a US Marine Corps sniper, expressed skepticism about the claim in a tweet. At such a long distance, he said, the tiniest adjustment to the sniper’s windage or elevation settings on the scope could result in a bullet being wildly off course when it got to its target.

4 Responses to Now This is What Gun Control Should Be