30X36, acrylic on canvas, by Jack Lee, depicting 4 US Navy Hellcat in a dogfight against 3 Japanese Zero’s, circa 1944, South Pacific. This painting is one of three, all WWII aviation types. 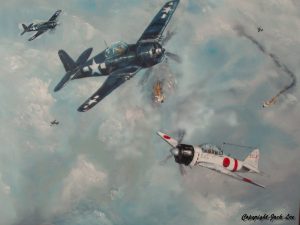 Note: The actual paintings reflect more vivid colors and details not visible on the digital photos. For some reason the pic comes out blurry when I upload.