Cleaning Up After the Transients

Thanks go to Common Sense for this article….

After viewing the “MCS” link to the counsel meeting of July 5th, I wonder just how frustrated Mr. Newman is with the city’s position toward homeless vagrants, and what he is willing to do to jeopardize it?

He seems to have a very short fuse on the subject.  I wondered if his selection of gathering in the park by providing food and supplies, isn’t in direct retaliation to his perceived notion that Chico is only interested in driving out the homeless; and not helping them re-enter society and begin contributing to the city and not just abusing Chico’s city codes because Newman feels they are misguided intentions’ without merit?  Even if the city codes intentions were to help prevent the destruction being created by those he feeds.

Personally, I view a lot what Newman objects to in city ordinances as reasonable and necessary do to the direct impact of the destruction and their disrespect of public and private property as caused by the homeless through their own actions.

Are there services in town that provide daytime activities for people less capable of managing their lives, I am not currently up to date of what Behavior Health provides, but at one time they had a meeting place as I recall and a mentor oriented facility that tried to help retrain those that Newman classified as having a debilitating mental reasoning, which he uses as justification and as such he claims this prevents them from understanding it is their own actions that are causing the city codes to be enacted. Those same codes were put in place only to prevent misuse of public and private property. Maybe a verbal message or reminder of how one acts in society given with a sandwich is a place Mr. Newman could implant upon them as well as feeding and sundry items. 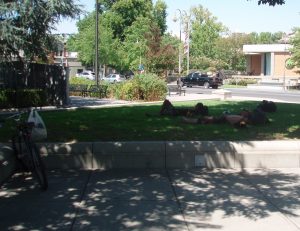 However, after viewing the video, I would surmise that if Mr. Newman was having a bad day at the park and started in with” his in your face attitude” toward someone he considers disrespectful toward a homeless person (including something as normal as a citizen not wanting to be approached by a panhandler or a police officer just doing their job) based on the video I doubt he would verbal exercise self-control and thus expose those he is “helping” to witness a violent style of how to conduct oneself in public.

People with mental issue do absorb such patterns as those readily, and then use those methods because they may perceive it helps them in obtaining their wants. It is much like how a child may act up while shopping with Mom and wanting something she did not want to purchase (how often do we see or hear that) and the same messaging applies with Mr. Newman’s verbal outbreaks.

Mr. Newman has displayed a” last nerve” attitude about Chico wanting to drive out the homeless vagrants, and seems willing to accept a trashed out, even open sewer like conditions in downtown, or the parks, riverbeds campgrounds. ( I am not even talking about drug needles, just litter and human waste) Newman seems to justify those actions and vandalism by the homeless to public property in his objections to new city ordinances design to prevent those problems.

Yes he homeless are people and some do need help and some will try to regain a place in society, most will not, and therein lies the problem, how do you determine who is wanting to improve their lifestyle how do you help them, while at the same time how do you prevent a lifelong “welfare addict ” who is dependent on abusing the system? 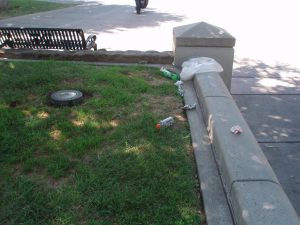 I think, People when guided by responsible reward, will understand nothing positive ever comes from continued forms of welfare, people needs should not be met based on the amount of public assistance the “rich should supply”, but a hand-up approach, based on one’s own willingness to build or even maintain a better community and not just live based on a take from others efforts attitude without giving back in return, something even it as simple as obeying laws the rest of try to follow would be a great place to start.

(see photo above) Lastly here is a picture of how Newman’s group of homeless left the plaza, which less than 60 minutes prior was pristine. Yes we cleaned it up, not for them, but for Chico.

This entry was posted in Uncategorized and tagged Chico, park transients, plaza. Bookmark the permalink.

13 Responses to Cleaning Up After the Transients