According to the best information available, North Korea’s Kim Jong-Un has used his presidential orders to murder about 340 people within the top levels of his government.

While some of the terrifying methods of execution have never been confirmed, the mere mention of them is sure to keep his inner circle in line – and any potential rivals quiet, say experts.

Kim Jong Nam, a half-brother, was sprayed in the face with VX nerve agent by two women as he prepared to catch a flight from Kuala Lampur to Macau. North Korea has denied reports that Kim ordered his paternal half-brother’s murder, but in the event of coup Nam would have been the likely successor.

Reports widely circulated say Uncle Jang Song-thaek, was like a father to Kim Jong Un.  He served second-in-command to the supreme leader but apparently he did something his nephew really, really, didn’t like, because he was ripped to shreds by a pack of hungry dogs (aka hungry N. Korean peasants).  Although some say he was merely blown into tiny bits by cannons.  Oh, well, that’s better…not.  His crime, anti-state acts!  Could he have been caught watching South Korean TV?  That’s an act against the state.

His father Kim Il-Jung reportedly let two million people starve to death in the 90’s.  So the 340 executions since his little boy took over in 2011 doesn’t look too bad by comparison.  However, sadistic little Kim forces people to watch every execution. 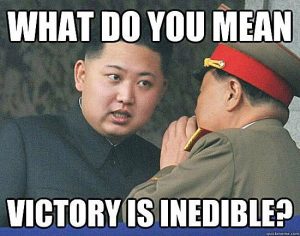 Bet you did not know that under lil Kim’s pounds of fat, is the body of a trained athlete?  Yep, Kim Jong-un claims he North Korea’s highest mountain, Mount Paektu. He practically sprinted to the top of the 9,022-foot peak.  He said, “Climbing Mount Paektu provides precious mental pabulum more powerful than any kind of nuclear weapon.”

Kim Jong-un started driving at the age of 3 and quickly went on to become a skilled composer and musician.  At age 9 he raced his daddy’s yacht against a capitalist pig’s yacht and beat him against all odds.

According to Kim Jong-il’s (fat Kim’s Dad) official biography, he was born in a secret cabin 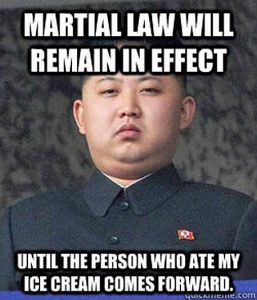 high atop Mount Paektu in 1942.  His birth was widely prophesied by a swallow, and was signaled by a double rainbow over the mountain and a new star in the sky.  I wonder if his mother was present or just Satan?

But, according to official records in Pyongyang, Kim Jong-il started walking when he was 3 weeks old and could talk at 8 weeks.   Wonder when he learned to kill?

A former tutor of Kim Jong-il stated that in an effort to remove “substandard” stock from the gene pool, Kim lured a large number of short people with pamphlets advertising wonder-growth drugs. They were then deported to uninhabited islands. Thus began the pop song, Short People.

During his stint at Kim Il-Sung University, Kim Jong-il authored a staggering 1,500 books 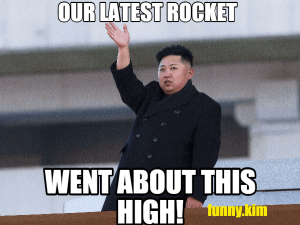 in less than three years and also composed six full operas. The operas, according to his biography, were better than any in the history of music.  Then he gave some of his songs to a new rock group called the Beatles and you know the rest of that story.