Just finished:  This is a 16X20 painting, acrylic on canvas.   It depicts a World War Two, American fighter called a P-40 Warhawk.

The plane was armed with six 50 Cal. machine guns and sometimes it carried rockets mounted under the wings.  In real life it was 32 feet long and a top speed around 360 mph.  The basic design for the P40 came from an air racer in 1930’s, it’s actually plans were finished in 1935.

It was fairly easy to build and maintain, thus over 11,000 were made for WWII during 42 and 43.  However, it was considered underpowered and no match for the nimble Japanese Zero, except for diving speed.    There were many paint configurations for the P40, but this was the most common, olive drab.

The plane in the painting is flying in the late afternoon over a (Burma) rain forest where water from a lake has forms a number of shallow warm rivers.   Does it give you any feelings?   All comments are welcome.

Details:  The large bulge under the wing is where the landing gear retracts.  The 3 dots on the wing are the tips of the machine gun barrels.  Notice under the red spinner the inverted Y?  That was for ducting cool air to the radiator.  Right behind the shark eye are exhaust pipes, six total.  At the top of the engine cowling was a small air scoop barely visible because of the spinning 3 bladed propeller.

Can you see the outside rear view mirror mounted on top the cockpit?

On the leading edge of the left wing you will note a pitot tube for airspeed, looks like a spear gun.  The red dot below the cockpit was a fuel cap.  A lot of tedious detail went into this painting! 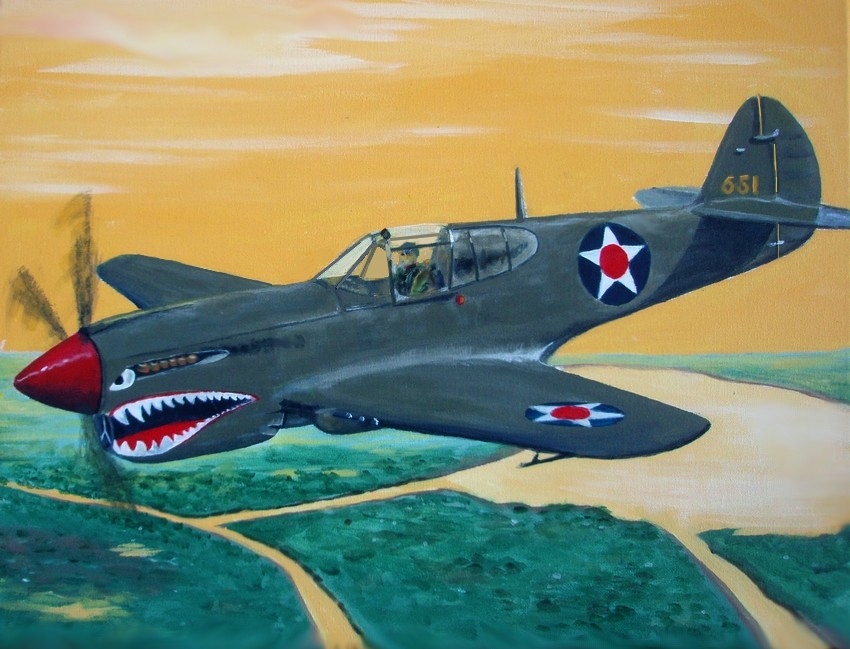