Posted by Jack with snippets from several news stories…. 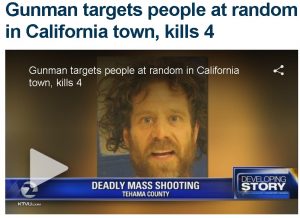 A gunman driving stolen vehicles at various times and choosing his targets at random opened fire “without provocation” in a tiny, rural Northern California town Tuesday, killing four people and wounding at least 10 others, including a student at an elementary school, before police shot him dead, authorities said.

Media outlets in Tehama County District Attorney’s Office confirmed that Kevin Janson Neal, 43-years-old was the suspected shooter. This is an old booking photo of him on charges of assault with a deadly weapon.

At least one of the shooters neighbor’s said they had reported the suspect because he had been shooting firearms in the immediate area of their apartment complex. However, there is not indication that the Sheriff’s Office received this complaint or took any action regarding the shooting before today’s shooting incident.

The rampage began shortly before 8 a.m. when the gunman fatally shot a neighbor he had been accused of stabbing in January, Tehama County Assistant Sheriff Phil Johnston said.

Media outlets in Tehama County District Attorney’s Office confirmed that Kevin Janson Neal, 43-years-old was the suspected shooter. This is an old booking photo of him on charges of assault with a deadly weapon.

The shooter apparently had a long history with law enforcement and was a convicted felon.  As a felon, he was not allowed to purchase or possess any firearms.

Shortly afterward, the gunman, with his cache of stolen weapons, rammed through the gate of Rancho Tehama Elementary School about 2 miles away and spent about six minutes shooting into the building, striking at least one student, Johnston said.

Surveillance video showed the gunman, who was not identified, (actually he was – see above) trying unsuccessfully to enter the school, authorities said.

Crazy people like this guy is yet one more reason why you citizens should be carrying your legal weapon and your CCW permit on you at all times.  What do you want to be that one or more of the school employees will be seeking a CCW permit real soon?