Mexico – Great Place to be Murdered

Soaring levels of drug-related violence made 2017 Mexico’s most murderous year on record, according to government statistics released Sunday.

There were 25,339 homicides in Mexico last year, a 23% jump from 2016 and the highest number since at least 1997, the year the government began tracking the data. Overall, murders in Mexico had been declining in recent years, reaching a low of 15,520 in 2014. But officials say a surge in drug-related crime reversed that trend. 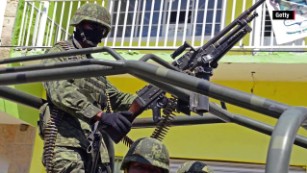 Many parts of western Mexico, including the states of Guerrero, Jalisco, Sinaloa and Baja California Sur, have been caught up in violence between competing drug cartels.  Outside traditional war zones, Mexico is also a dangerous place for journalists.  Six were slaughtered last year and this year it’s likely to be worse.

We provide $320,000,000 a year to aid Mexico, but Mexico blames America for not doing enough, citing the American appetite for cocaine and other drugs that has fueled the drug trade in Mexico and created the cartels.

Mexico’s leaders speak with a forked tongue.  It has proven to be a less than cooperative partner in the war on drugs.  The Mexican cops can’t be trusted, it’s just a reflection of their society.  The army is almost as corrupt, but they have less opportunity to be bribed, otherwise they would be as bad as the cops.   Extraditions, arrest warrants and raids are routinely blocked by Mexican authorities.  Air surveillance over Mexico and other intelligence gathering missions are similarly denied by Mexican authorities.  We provide them with vehicles, uniforms, weapons, training and hundreds of millions of tax dollars.  But, America is not doing enough?

Between Mexico’s notorious unclean drinking water, E.coli in food,  poor sanitation, gross pollution, crime and overall anti-American attitudes, why would any American citizen want to vacation in Mexico?  And why would we want to bring that terrible stuff to our country?   For that answer you would you would have to ask a democrat, because my party doesn’t want any of it.

This entry was posted in Uncategorized and tagged drugs, Mexico, murder. Bookmark the permalink.

5 Responses to Mexico – Great Place to be Murdered