DNA evidence lifted from a fingerprint on the package bomb sent to Maxine Waters led the FBI to the suspect, Cesar Sayoc, in the mail bomb case. Sayoc, 56, is an avid Trump supporter, evidenced by the his van which is covered in Trump/Pence photos and stickers. Negative messages about top Democrats and media are also prominently displayed on the van. (see Twitter photo below)

Sayoc has a criminal history and ties to New York. He currently resides in Aventura, Florida but has been living in his van since his parents kicked him out of their home. He is charged with interstate transport of explosives, illegal mailing of explosives, threats against former presidents and other persons, threatening interstate commerce, and assaulting current and former federal officers. 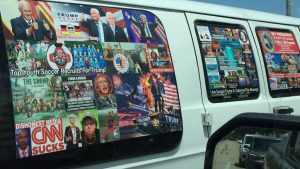 The FBI has yet to reveal a motive and cautioned that the investigation is ongoing and there may be more bombs. Several celebrities have been cautioned. The FBI would not confirm that Sayoc acted alone. Sayoc told investigators that the “pipe bombs wouldn’t have hurt anyone and that he didn’t want to hurt anyone,” according to one official.

I think I saw this man behind Trump at a rally in Florida. He stuck out because he was acting strangely…hyper animated. He has retained a lawyer.

Those who might be wondering will notice that FOX IS SHOWING PHOTOS OF THE VAN. They are also recognizing his support for Trump and animus toward certain media and celebrities. Although I do not condone his actions in any way, shape, or form, I can’t much blame him for the animosity he must feel toward those who have been vile in their remarks, or those who have denigrated and called for violence against Republican leaders and Trump followers.