Maxine Waters to be in Charge of Spending? 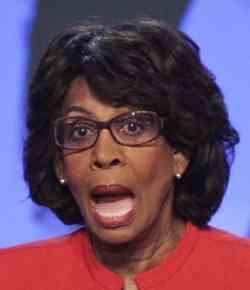 (Maxine Waters shown left) Here’s a woman of bad character. She’s a far left agitator with little regard for and even less understanding of…. the U.S. Constitution.  She represents everything a decent voter should oppose.

She’s a corrupt, career politician that has been embroiled in one scandal after another.  How she remains in office and out of jail is a mystery.

The woman is devious and has powerful friends, but she’s not smart…literally, not smart.   She’s easily controlled and manipulated by her fellow radicals.  That’s why I say, Maxine Waters doesn’t have the mental capacity to be seated behind the wheel of a car, much less be seated in Congress!  However, if the democrats win the House, guess who could be the new chair presiding over government spending?

This is a nightmare scenario that’s hard to believe and the really crazy part is, she’s actually got a good chance to do it!  I would rather pick any…any other democrat…. than Maxine Waters and yet she ranks highest on the list of democrats to Chair the next committee.  Un-be-lievable.   What’s wrong with the democratic party?

President Trump warned voters against the Democratic Party’s takeover in the upcoming midterm elections, saying their victory will mean California Congresswoman Maxine Waters will be put in charge of the country’s finances.

“Congresswoman Maxine Waters was called the most Corrupt Member of Congress!” Trump tweeted early Saturday. “If Dems win, she would be put in charge of our Country’s finances. The beginning of the end!”

The president appears to be referencing a Fox News report that said Waters is likely to take the reins of a powerful House committee in the event of Democrats retaking the lower chamber.

The 80-year-old lawmaker from California, who Trump previously called a “low-IQ individual,” is likely to be promoted to chairwoman of the House Financial Services Committee, where she’s currently the ranking member. The committee has the power to subpoena and direct the fate of certain bills before they even reach a floor vote.

This entry was posted in Uncategorized and tagged 2018, Congress, election, Maxine Water, stupid. Bookmark the permalink.

3 Responses to Maxine Waters to be in Charge of Spending?