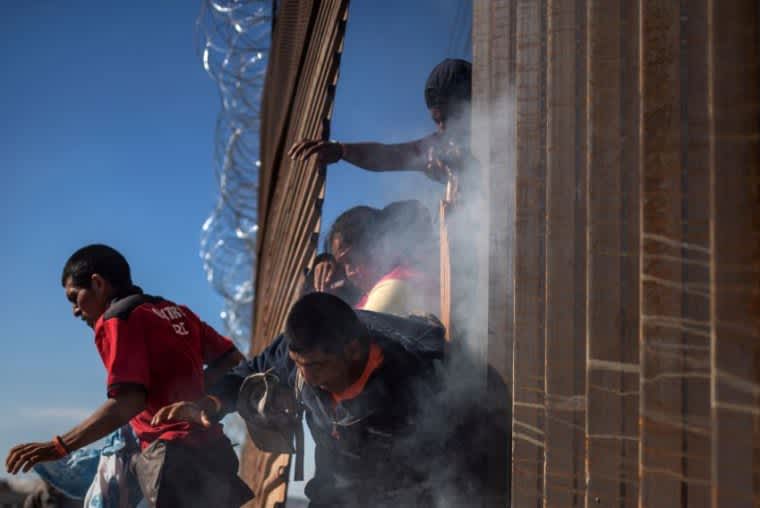 We all should know by now, the democrats have a hate on for Trump unlike any other in our long political history, uh, President Lincoln excepted.  This blind hate has caused them to do all manner of crazy and sometimes criminal things.

To get at Trump they will lie, incite riots and engage in blatant criminal conduct. They’ve been unrelenting in an investigation that began with false information and has morphed into a sort of investigative free-for-all. They’ve repeatedly mocked and insulted Trump, his wife and his sons. They’ve even conspire with federal agencies to leak classified reports.

Now here comes more tossed mud, but this time it missed the target (Trump) and landed on the democratic party.

Democrat Sen. Brian Schatz – HI., tweeted that US military and border patrol agents may be in violation of international agreements governing the use of chemical weapons against Central American migrants who were attempting to enter the US illegally. His stupidity embarrassed and insulted the nation and it falsely maligned our border police and military, just to slander Donald Trump?

At the time his allegation went public, our Southern border was under attack – and yes, tear gas was used to repel the invaders.  So what?

The media estimated that somewhere between 500-1000 people rushed the blockade on the Mexico side, then charged our Cal border near Tijuana. They hurled rocks at our security personnel and tried to squeeze through gaps in the fence.  They pulled at a sheet metal wall, made an opening and started surging through.  The use of tear gas was a very modest use of force in response.

Schatz wasn’t the only democrat expressing what can only be fake outrage to the media. Failed dem senate candidate Beto O’Rourke from Texas and a Southern California Congressman joined in too.  Schatz later tweeted, “Using tear gas against families is a new low.” Well, I think Schatz and the other provocateurs are still lower. 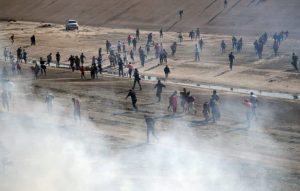 The Dems [claim] they don’t want a divided America, then they spout off  with lies likely to promote hate?  Dems, take a hint, hate is not a good conversation starter.  It is not a theme likely to unite… got it?

To put Sen. Schatz statements into its proper context, you should know he sits on Defense Appropriations Committee. Great, huh? We’ve got a blithering idiot on a very important committee.  He has no military background and based on his tweets about the use of chemical weapons, apparently no common sense either.  Wonder why the dems would want him on that committee?  Oh, right, because that’s where the money is!  You know, plenty of graft, kickbacks, bribes and all kinds of back room deals done to get defense contracts.  This is the deep part of the swamp.   Of course that’s why Schatz is there!

But, back on point….it should go without saying, tear gas doesn’t violate any chemical-weapons treaties. (said with a chuckle)  The idea was so silly, so wrong and so foolish that Schatz had to delete his tweet.  Probably realizing (belatedly) how absurd he looked to the public.

But, was there even a need for tear gas?  Yes.  Eye witnesses and media pictures tell the story, this was a serious clash between illegal immigrants and who knows who else, trying to storm the U.S. border.   Heavy objects, such as stones, were thrown at border patrol agents.  What are they supposed to do, just stand there?  And look what the Chair of the Democratic Party had to say about it…

Since none of our police or military are mind readers, people rushing the border from the Mexico side must be considered a threat and to be breaking the law until we can determine their true intent.  Under such circumstances we are entitled to use reasonable force to protect our borders.

Any legislator should know that the difference between illegal entry or asking for asylum  can only be determined after being taken into custody.   The arrestees motives for illegal entry must be vetted before asylum can be granted.  That takes a lot of investigative time and taxpayer money.  Meanwhile those suspected of an illegal entry are held in custody.  They are also given the option to return home, it’s their choice.