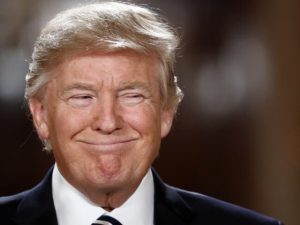 I’ve never voted against a GOP president, but Trump is on course to be my first.

Why?  Because he constantly pushes my buttons and I can’t take it anymore!!!!   It’s not his policies, we agree in principal on most important things.  It’s his un-presidential behavior that reflects so poorly on his office and in turn on our country!

His judgement comes into question when  he can’t see how his stupid Tweets and his jabs at anyone over anything have hurt him and stalled his important agenda.  And yet he continues to do this despite all the strong warnings from his advisers and fellow republicans.  It seems like he can’t let any slight go without a public retort!  That’s infantile.

Sure, I can appreciate Trumps candor  and transparency, when it’s reasonable.  That’s just great, but acting stupid when he does it is another.

We’ve cut him a lot of slack because he was so instantly hated by the DNC and we didn’t like him being bullied.  And we cut him slack because of his S.C. appointments- all great.  We also made allowances because it looked like he could be good for the economy, that he might secure the border, that he might expose corruption in Washington, that he might get a handle on the runaway spending and so on, but geez his bizarre behavior has a lot of worried and now we had mixed results on too many planks in his platform and the deficit spending looks pretty bad.

Let’s face it, he’s a jerk.  I could live with that if he remained effective, but he’s losing his effectiveness every day because he doesn’t know when to shut up.   He might surround himself with great advisors, but if nobody can tell him anything, what’s the point?  There’s no logic in supporting a captain who keeps steering his ship into icebergs instead of around them.

There must be better choices for voters.  There must be people who can do this job far better than Trump.  He’s really lowered the bar.  I sure hope he improves his job performance soon, because if he doesn’t, I’m looking for a new president.

I say this at the risk of upsetting some really good folks who want to see Trump’s agenda move foreword and keep the presidency out of the hands of the far left kooks.  I want that too, but right now I can’t see how Trump is the man to do it.    Your thoughts?