The U.S. Navy is drafting new guidelines for pilots and other personnel to report encounters with “unidentified aircraft,” a significant new step in creating a formal process to collect and analyze the unexplained sightings — and destigmatize them.

The previously unreported move is in response to a series of sightings of unknown, highly advanced aircraft intruding on Navy strike groups and other sensitive military formations and facilities, the service says.

“There have been a number of reports of unauthorized and/or unidentified aircraft entering various military-controlled ranges and designated air space in recent years,” the Navy said in a statement in response to questions from POLITICO. “For safety and security concerns, the Navy and the [U.S. Air Force] takes these reports very seriously and investigates each and every report.

“As part of this effort,” it added, “the Navy is updating and formalizing the process by which reports of any such suspected incursions can be made to the cognizant authorities. A new message to the fleet that will detail the steps for reporting is in draft.”

To be clear, the Navy isn’t endorsing the idea that its sailors have encountered alien spacecraft. But it is acknowledging there have been enough strange aerial sightings by credible and highly trained military personnel that they need to be recorded in the official record and studied — rather than dismissed as some kooky phenomena from the realm of science-fiction.

I’ve always been intrigued by this subject because what if it’s true?  What if there is alien life out there and it’s been visiting us for hundreds or perhaps thousands of years?  There is no question that throughout our recorded history there have been sightings of unexplainable things in the sky and some ancient reports claim actual encounters with non-terrestrial beings.  These things raise questions, but provide few answers.

But, reporting has changed because technology is allowing us to see exactly what eye witnesses are seeing.  And what we are seeing below is purported to 100% real.  It’s evidence captured by the Air Force and the US Navy one video from pilots confirming what is shown.  And there is video from at least a half dozen other nations military showing the same sort of thing, as well as innumerable sightings by pilots of passenger and cargo jets, ships at sea, civilian pilots, ground sightings and radar sightings.  There’s been so many sightings that the US Navy can’t ignore the mounting evidence of something that is clearly not of this earth or possibly not of this time and it’s here right now.   Can it all be made up?  Can it all be a huge joke to play on us? I think not. 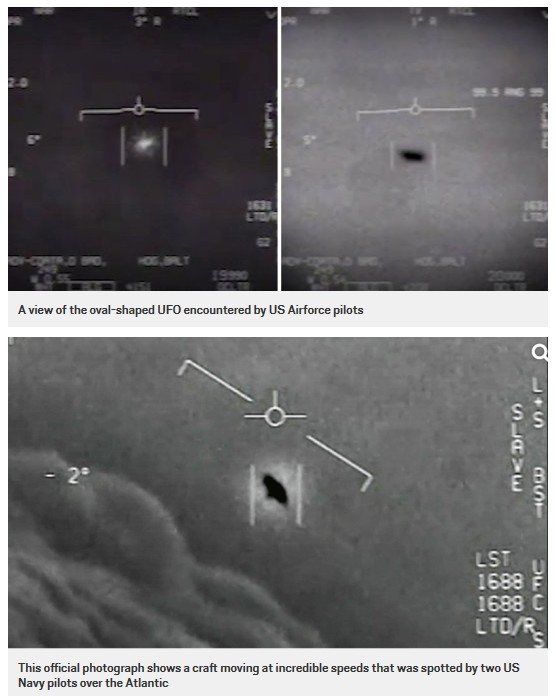 BBC Radio, “…the national security implications of these incidents are concerning — but the scientific opportunities are thrilling. Who knows what perils we may avoid or opportunities we might identify if we follow the data?”