Ghost at the Museum

The Chico Air Museum is one of the area’s best tourist attractions and features a number of rare artifacts and planes, but it also has another attraction you won’t find on the brouchure, this is the ghost, albeit a friendly one.  Please read on:

The facility occupies a World War Two era hanger and back in it’s day the airport was an army air corps training base.  Future pilots for fighters and bombers began their basic pilot school here.  From 1941 to 1945 the base trained over 5300 pilots in the famous Vultee-BT 13.  And as you might expect there were training accidents, 24 cadets died in mishaps on and around the base.

After the wars years the base continued as an Air Force Reserve training base and it was scaled back considerably.  Then in the mid 1950’s it finally transitioned into a civilian airpor 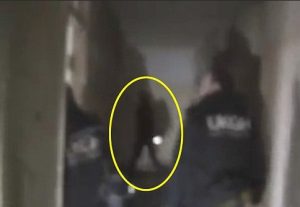 t run by the city, although the USAF Res., still held their meetings in one of the remaining military buildings.   The original hangers (called Butler buildings) along the flight line were transitioned into a number uses, from private ownership, a fire fighting base for air tankers,  aircraft maintenance, parts storage and even an airplane sales and rental building.  (The picture is for illustration purposes only and is not the  apparition)  The last hanger on the field, the most distant from the control tower, is now home to the museum and our ghost.

It’s first appearance, as far as I know, was about 2 years ago, not long after the museum transferred to the new facility.  Since then, people reported seeing a fleeting shadowed figure of a man in the two rear storage rooms.   Doors opened and closed  seeming all on their own.  These odd events happen at no particular time or with any particular staffer.

For example, one early morning in August, one of the restoration team members was the first to open.   He came in from the airport side through the rear entrance and when he walked around the glass nose of a Navy patrol plane, he saw a man standing on the catwalk above him.  The startled mechanic watch as the man jumped down, which would have injured most anyone, but before he could hit the concrete floor he just vanished.   There was no noise, he just faded and he was gone.  The mechanic thought he must have imagined it and so he kept it to himself, until one day when he heard other staff talking about their weird ghostly experiences.  Then he opened up about what he saw.

He said, when it happened he was so rattled, he really couldn’t provide much a 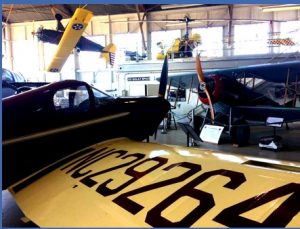 description, as he recalls it was just a slender male, maybe in his late 20’s or early 30’s wearing a light colored clothing, possibly a uniform?  But, he can’t be sure, it just happened so fast.

Strange and unexplainable occurrences continue to this day.   The possible identity of the ghost has received much speculation from the staff, but so far whoever he is remains a complete mystery.

A clue:  Many of the artifacts have wartime history behind them and this includes several artifacts that came from the crash site of a B29 that killed the entire crew, save one. And lets not forget the deaths of 24 young pilots while stationed at the base in 1941-45.  Has some confused spirit from World War II attached itself to something in inventory or could it be a deceased pilot that once flew one a vintage aircraft on display at the facility?  Who knows?  But, so far the ghost is not helping us with clues, he’s very skittish and seems to dash off whenever someone gets too close.

For those who want to try to catch a glimpse of the ghost, bring your camera.  The doors to the Chico Air Museum  open to public at 9 a.m. until 2 p.m. Thursday through Sunday.

DISCLAIMER:  This story was for news and information purposes only.  It was not approved or sanctioned in anyway by the Chico Air Museum, their Board of Directors or by any official representing the museum.  The views expressed are strictly those of the author.

3 Responses to Ghost at the Museum