“Rats! They fought the dogs and killed the cats,
And bit the babies in the cradles,
And ate the cheeses out of the vats,
And licked the soup from the cooks’ own ladle’s,
Split open the kegs of salted sprats,
Made nests inside men’s Sunday hats,
And even spoiled the women’s chats
By drowning their speaking
With shrieking and squeaking
In fifty different sharps and flats.“  Robert Browning

Excerpt from the Los Angeles Times, by Steve Lopez 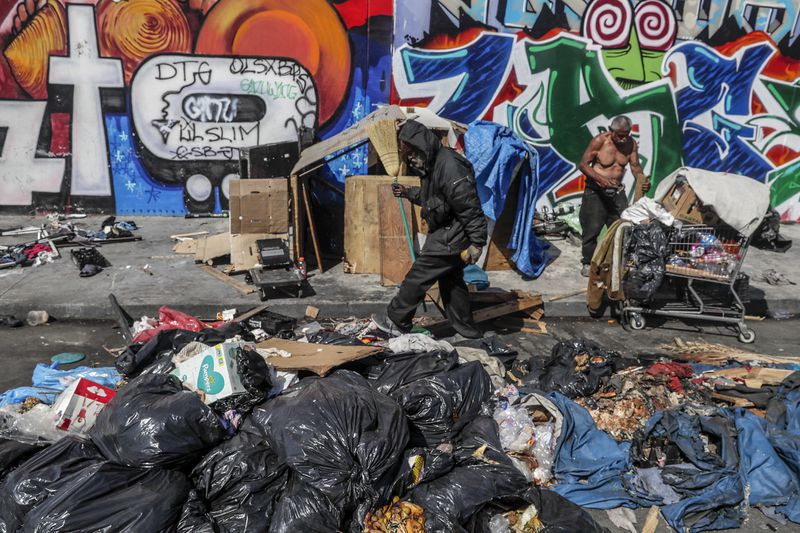 The LAPD station on skid row was cited by the state for a rodent infestation and other unsanitary conditions, and one employee there was infected with the strain of bacteria that causes typhoid fever.

We’ve got thousands of people huddled on the streets, many of them withering away with physical and mental disease. Sidewalks have disappeared, hidden by tents and the kinds of makeshift shanties you see in Third World places. Typhoid and typhus are in the news, and an army of rodents is on the move.

On Thursday I saw a county health inspector on rat patrol between 7th and 8th streets on skid row. He was carrying a clipboard and said he had found droppings and other evidence of rodents, and I asked where:

The city of Los Angeles has become a giant trash receptacle. It used to be that illegal dumpers were a little more discreet, tossing their refuse in fields and gullies and remote outposts.

Now city streets are treated like dumpsters, or even toilets — on Thursday, the 1600 block of Santee Street was cordoned off after someone dumped a fat load of poop in the street. I’m not sure when any of this became the norm, but it must have something to do with the knowledge that you can get away with it. Every time sanitation crews knock down one mess, another dumpsite springs up nearby.

You wanna take a tour with me of how things looked Wednesday and Thursday?

OK, the shovels were still out on Crocker Street, which was looking pretty good, so I went over to East 10th Street and Naomi Avenue, several blocks away, near the Coca-Cola distribution center.

The north side of 10th Street looked like a landfill. Trash was scattered in the street and on the sidewalk, and there was a little bit of everything. Splintered lumber, metal poles, soiled blankets and clothing, a sofa, buckets, boxes.

“Trucks come by and run over the trash,” said Ron Riego, 60, who lives under a tarp on the corner and pointed out where some of the debris has been flattened by traffic.   END, but its not really, its just the beginning.

By Jack:  In CA we’re taking in over one quarter of the entire nation’s population of drug addicts, burnouts, crazies, and bums and every year this number swells.  That massive concentration of human misery is absolutely unmanageable for one state and sooner or later the legislators in Sacramento are going to figure that out.  But, in the meanwhile they are going to spend billions of tax dollars chasing a solution that can’t be found here.

Our dear comrade legislators in Sacratomato are promoting the idea that if we could just build enough affordable housing, (transitional housing they call it) then we could bring this crisis under control!

In our little town of Chico, the council is determined to do its part to cure the homeless problem by what else. . . building tiny houses!  But, then our council is dominated by liberal idiots, so what else could you expect.  Certainly nothing rational.   Affordable housing is not the answer for what is causing our so-called homeless crisis.  I say so-called because these people are beyond beingly merely homeless.  These people are largely a mix of dysfunctional people done in by mental problems, alcohol and drugs and they will never be employable.  They’re brains are fried.  There is no way they will ever be able to contribute to their own care.

Consider, that the highest percentage of illegal aliens reside in Los Angeles and they find housing, is our legislature indirectly blaming the lack of affordable housing on illegal aliens?  That would be rich.

Note this bi-partisan bill so frequently misquoted by liberals-

The Act in effect ended all hospital commitments by the judiciary system, except in the case of criminal sentencing, e.g., convicted sexual offenders, and those who were “gravely disabled”, defined as unable to obtain food, clothing, or housing.[1] It did not, however, impede the right of voluntary commitments. It expanded the evaluative power of psychiatrists and created provisions and criteria for holds.

Prior to 1987 it was assumed that the Act allowed involuntary treatment for those who were detained under an initial three-day hold (for evaluation and treatment) and a subsequent fourteen-day hospitalization (for those patients declared after the three-day hold to be dangerous to themselves or others or gravely disabled). However, in the 1987 case of Riese v. St. Mary’s Hospital and Medical Center, the California Court of Appeal declared that these patients had the right to exercise informed consent regarding the use of antipsychotic drugs, except in an emergency, and if they rejected medication “a judicial determination of their incapacity to make treatment decisions” was required before they could be involuntarily treated.[2][3] This case was a class action suit brought in the name of patient Eleanor Riese by the California ACLU.[2] Eleanor Riese’s story is depicted in the movie 55 Steps.[4]