Murder in Mexico – A Family Legacy of Death

These particular Americans knew the danger, but they had faith that God would protect them in a land filled with violence.   They chose to live in the state of Sonora, Mexico about 70 miles from the US border, because they felt it was God’s will and for a time they prospered and all was well.

Oh, there were some jealousies among the locals because this enclave of Anglos, mostly from the LeBaron family, made a success on the land where the locals had failed. Despite the fact they have lived there for generations, they were considered outsiders.  Several locals have been suspected of carrying out murderous raids on the LeBaron family houses.  But, they also had their circle of friends too.  So they stayed, hoping the bad times would pass.

They owned cattle, and raised crops and were in most ways very self sufficient.  They believed in their religious mission that valued family, hard work, worship and outreach to spread the Gospel.  They were in all respects peaceful and loving people that would never harm anyone, but they also knew they were under constant threat by those that hated them for their success and perhaps their religion. 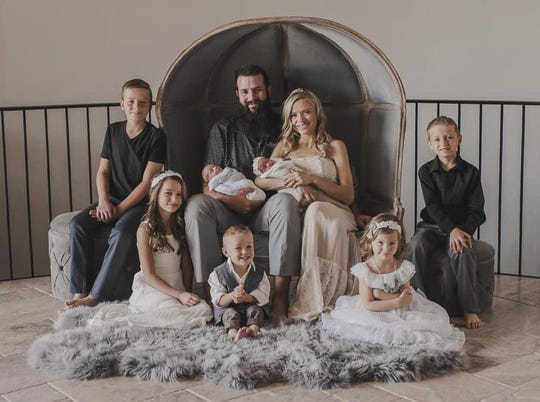 Today 9 of them, many of them children, are dead; all killed in a hail of gunfire.  This included twin babies.   They were caught, in what police would later describe as an ambush by members of a drug cartel.   (The LeBaron’s are shown on the left)

They were  slaughtered inside their two of their 3 SUV’s travelling in a convoy for protection.  The two lead SUV’s were riddled with bullet holes and bought to a halt, then the vehicles were set on fire.  The other SUV made a U-turn and evaded the gunfire.

Some of the family members speculated that it must have been a case of mistaken identity, however the deliberate execution style killings say otherwise.  3 mothers and their little children were dressed up and headed for a wedding in Chihuahua.  They didn’t look like cartel gangsters, they looked exactly what they were, a nice American family.

Several of the children from the first two vehicles escaped under fire and had to walk miles for help.   At this time, the media has been told there could be several more family members unaccounted for, but media reports are at best unreliable.

When President Trump heard about this murder he immediately called Mexico’s President Andrés Manuel López Obrador and offered military support to wage war on the drug cartel and “wipe them off the face of the earth.”

The Mexican President swiftly rejected this offer to send American troops over the border to “wage war” on drug cartels.  In his opinion, there was no need for American assistance or intervention and deemed the offer of military support to be irrational.

Once again, the facts of the matter would say different, that it is Obrador that is being irrational.  Thanks to drug cartels Mexico has that highest homicide rate in the world and is infested with drug lords battling each other over territory and American dollars.

State Dept. data said more Americans have been murdered in Mexico than the sum of American murders in the combined countries of the world.

Of the five Mexican states that the State Department tells Americans not to visit, one, Tamaulipas, borders the USA. It shares a 230-mile border with Texas, and murder, armed robbery, carjacking, kidnapping, extortion and sexual assault commonly occur, the State Department says.   President Trump warned about illegals crossing the border in the US, citing that drug smugglers, murderers and rapists were among the hoards crossing.  The democrats laughed at this called Trump a racist.

And now this unusual twist to the story:

A Family’s Legacy of Death : Ervil LeBaron said God told him to kill anyone who strayed from his polygamist cult. A tenacious Salt Lake investigator tracked the LeBarons for 15 years. Now, an anonymous tip may have helped him close a case that claimed as many as 30 lives.

And, 20 years ago, when God told him to break away from his family’s polygamist sect, he founded his own church, tearing apart the once close-knit family.

That’s apparently when God told Ervil to start killing people, too, including his own kin.

Authorities say it was the start of a chilling family tradition that continues to reverberate today among his descendants and followers more than a decade after his death.

This entry was posted in Police, Police and Crime. Bookmark the permalink.

6 Responses to Murder in Mexico – A Family Legacy of Death